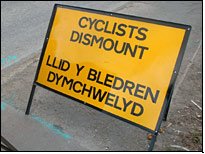 How many people in Wales speak Welsh? Obviously not many in the Vale of Glamorgan Council hence this mistake being blamed on an online translation service which they say must have confused cyclist for cystitis, of course this is the kind of mistake I make everyday. NOT.
I love living in Wales.


I JUST PUT BARNEY IN THE VIDEO PLAYER!
Yes it was me and why you may ask............. well, sanity intact, it is because Beauty was watching Lazy Town. Lazy Town is wierd but good but Beauty was becoming hysterical at Robbie Rotten dressed as a cow trying unsuccessfully to get into the mailbox! I have no idea why, I know my children see me as t 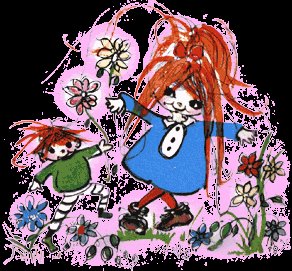 he fountain of all knowledge and get quite put out when I don't know everything and I tell them to 'Googgle it'(and yes Google I do mean Google as it is my favourite search engine) but this one was a mystery........any light shedding would be helpful.

Life was so much easier when I was Beauty's age, very few childrens programmes and all very predictable. This was one of my favourites, Sara and Hoppity. Sara's Dad had a toy hospital and Sara used to help him, Hoppity was an old toy that had been brought in. Hoppity was old and missing one leg when he came in and Sara's Dad had put on a leg slightly shorter, hence the name Hoppity.


I am so pleased that the someone has been arrested for the murder of JonBennet Ramsey, the family complained that they were wrongly persecuted because of what had happened and they were not responsible. I remember a program about the case and it portrayed the family as evasive and refusing to be interviewed by police. At the time all I wanted was for them to be interviewed properly and to be found not guilty and everyone to know the family were not guilty, I really wanted them to co-operate fully and just show people they were not guilty. But they wouldn't. I will be really glad when there is a trial to show who was really guilty. A parent killing a child is an unimaginable thing and any evidence that could prove this not to be so would be wonderful.

HEALTHY EATING UPDATE
Years ago I read about when Jane Fonda first started her healthy eating and how she described her children's birthday cakes as a healthy, heavy lumps and how she learned that enjoying yourself at celebrations with massive sugary creations was ok and IMPORTANT! Well for Ariel's birthaday I fancied the maltesers(me who only fancies chocolate about twice a year!) so I had some and they were lovely and healthy eating is back on track.
No guilt just a chocolate memory.
I look in the mirror and I see weight loss in my face and it is not my imagination, I used to hate the mosaic mirror in the downstairs bathroom(really,really hate) because my face looked huge but now my face looks fine. Fiona says she can't see the difference but then she says she can't remember me looking fat at 18 stone, it must be love. I LOVE KIDS.
Posted by MOTHER OF MANY at 7:20 am