So Warren Jeffs, one of the FBI's most wanted has been arrested. Obviously the fundamentalists will say that Warren Jeffs is a martyr and he and his 'church' are being tested and they will also say that the world is also being tested and we will all have something to learn from this.
So what have I learned?
I have learned that the fundamentalist mormon chuch has male members who are just there to be 'married' to lots of young girls. A lot of these young girls have very little education, a lot of them live in poverty, have poor health care and many suffer sexual abuse. In the 21st century this cannot be right! I know the world is not a perfect place but the USA is not a developing country and these young girls have certain rights which are being denied them and perhaps the case against Warren Jeffs may highlight their case and the situation for them will get better. I feel that the tv show Big Love has really helped to show what these poor girls who live in the fundamentalist compounds have to suffer every day. If they want to live in their compounds then fine but they don't have to live there uneducated, in poverty , with 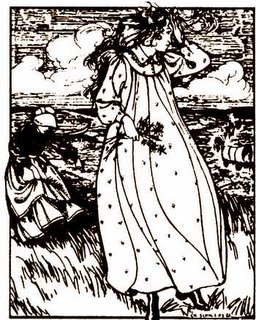 poor health and
enduring sexual abuse.
So I hope that we see some magor changes in the lives of these girls in the near future.

Off the wall comment- from somone who prefers dresses and skirts, I do like those Prairie dresses that they wear.
(I felt today's blog was getting a little too serious)


On a less serious note. Yesterday I spent a lot of time sorting out the middle room and the back room downstairs ready for when the builders arrive to install the doors. When you go into the middle room the armchair is to the left of the door and the bureau is to the right.Last night, leaving the joining doors open, I sat in the living room watching tv and Beauty went into the middle room to play. When all became quiet I went in to check what was happening. I found that Beauty had climbed up onto the back of the chair, trying to get to see what was on top of the bureau she had tried to cross the door area by putting her foot into one of my bags that was hanging on the door. And that is where I found her! Suspended from the top of the door clinging to the top of the bureau, stuck! She is mad! As mad as her sisters because Anastasia did something similar when she was little. Anastasia climbed up onto the first handle of the chest of drawers in her bedroom when she was little to get something off the top of the chest and could not get down. So that is where she stayed and fell asleep. She was meant to be in her bed having an afternoon nap. But she napped sleeping standing up leaning over the chest of drawers! However unlike Beauty who was suspended appeoximately 4 feet off the ground, Anastasia was only about 6 inches off the ground. I don't know which was funnier! 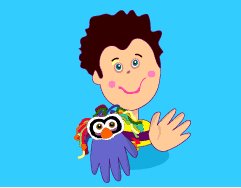 ON TV NOW!
I sometimes wonder about the sanity of the tv shedulers. Doodle Do Chris(you know, intelligent Newport boy!) is showing us how to make snap cards from old christmas cards, in AUGUST! What next, cutting snowflakes in June? Making sunhats in December?
Thankyou BBC for your sense of humor! You kill me.
Posted by MOTHER OF MANY at 9:20 am

Mum, Scott and I made a wedding website, take a look when you get a chance,
www.theknot.com/ourwedding/ElenHowells&ScottCrow
Love,
Elen
xoxoxo