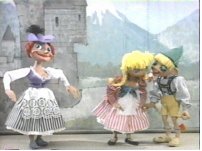 I don't know how Austria will feel about this but Beauty's song of choice at the moment is the Lonely Goatherd from the Sound of Music and she is almost word perfect, complete with yodel!
Of course she also loves anything Barney but hopefully Austria wouldn't care about that. I love the Sound of Music , it beats me why Austria are not so keen as it puts such a positive slant on the situation. Poor France didn't get off so lightly in the films and remember Remains of the Day? Did you know that in real life they escaped by catching a train to Italy and the youngest was actually a boy? And the grand-daughters(I think) are a singing troupe and will be performing in the UK next year? Perhaps it is to coincide with Andrew Lloyd Webbers new production. I would love to go to a sing-a-long Sound of Music and dress up as the Mother Superior. Any one else want to come? It would be better than Minskys AND we know all the words. Anastasia could be Maria, Belle you could be Liesel, Sno-White could be Louisa, Ariel could be Brigitta, Fiona could be Marta and of course Beauty could be Gretl. If we were to invite the continental family then the boys could of course be Friedrich and Kurt and Mama and Papa could be the Baroness and the Captain( but I know that will never happen). And for the only daughter of the continental family the only characters left are nuns or the housekeeper and that's not much of a choice at all.
HOWEVER, people also go as all sorts of other things such as the things listed in my favourite things. You know raindrops on roses and whiskers on kittens and brown paper packages tied up with string kind of things. Some even go all in green, they are the 'hills'. I think I would really like to go as a girl in a white dress with a blue satin sash or a snow flake.
Definitely on my to-do list.
Posted by MOTHER OF MANY at 3:13 pm