Echolalia rears it's ugly head. Beauty spent all of saturday repeating everything that was said in her hearing.We had the window open whilst we were watching 'Supernatural' and so a Daddy long legs flew in


She was even good enough to answer the question

,' Who is going to win the world cup' with,'Italy', of course we had spent all of saturday at her elderly Italian aunts house so she was heavily influenced by the Italian contingent. The 'Italian' family spent the afternoon at the pub and then at their house watching the England v Portugal match and of course rooting for the England team being of course more recently good cockneys. I was impressed that Running man wore an Italian football shirt all day and nobody said a word at the pub, I think it is because nobody sees them as serious opposition, however I think if he had worn a German shirt there would have been blood shed. At the superstore just before the motorway on the way home I did see a brave soul wearing a wrist sweatband in the German colours. 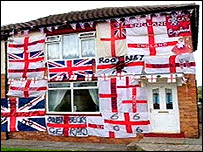 What was nice about visiting the wilds of England was to see all their flag poles with their English flags and to see how proud they were of their country, I am proud that at the drop of a hat the Welsh will bring out their Welsh flags, hats, scarves, shirts, shorts, dresses, socks to name but a few patriotic things but it was brilliant to see the English do the same. Whilst I was born in Wales and my father was Welsh , I a

m very proud to say that I am of mixed heritage and my mother was from England.
On the way home there was also a motorway diversion at Swindon and so we were diverted down the lanes between the Swindon motorway access points. What a nightmare! it was sooooooo very badly signposted that we now know what Swindon looks like. But we did see DITCHES(last week a crop circle now a ditch!)-something I haven't seen in years and I said, 'I bet my girls don't even know what a ditch is'. I was wrong-partly wrong- my girls were pleased to inform me that they knew what a ditch was because when telling them to be home by a certain time I had told them that it was because I didn't want to find them dead in a ditch. However, they had never actually seen a ditch-they were everywhere in the village where I grew up but even there they seem to have been filled in.
Echolalia, Italy and ditches- strange combination for a blog but HEY that's my life.........STRANGE!
Hywl
for now
Mother of Many x
Posted by MOTHER OF MANY at 8:47 am