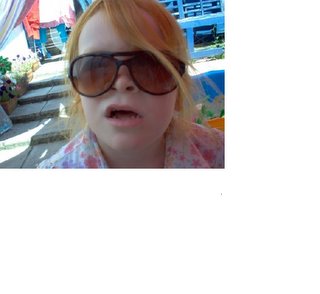 Bad news 'Textiles', I've replaced Jensen Ackles with another little hottie, is she cute or what?
I've decided to change the background daily, don't worry it will be your choice tomorrow.
Today is a lot cooler and that is good because I am not feeling so good, Remember Brilliant Brenda the lecturer from British Rail? I saw her on monday , first time for ages and she is still one of the most lovely people I know. Brenda is generous to a fault and I think she may have given me a nasty sore throat. She has been off work for ages with a throat probem but I might just as easily have picked it up from one of the boys in school. I am having difficulty swallowing but that is not it!! I also have a serious stomach upset, Gaviscon is my drink of choice and I'm not even pregnant. Whatever I eat gives me heartburn but I really have an almost non-existent appetite., I also feel sick when I eat, everything goes through me faster than the speed of light, I belch all the time and my stomach is always churning(such an attractive lot of symptoms). This has gone on for about two weeks and I have a doctors appointment tomorrow. What little I eat is now followed with copious amounts of cold water and it is really helping, no water and I would be seriously uncomfortable. My clothes are getting loose around the waist, one small Pollyanna blessing. Will update after doctors visit.
I am so glad that the Brits are finally getting out of Lebanon, I know that there have been complaints that other nations have got out earlier but they travelled by land. I personally would not have liked to have travelled the road to Damascus, physically or metaphorically. I feel for those who are leaving and their relatives as Ariel would have to study for a year in somewhere like the Lebanon if she did a degree in Arabic, the stress was bad enough when Anastasia was in Russia. At least when Anastasia was in Russia if you stayed together and did not go off piste you could at least had some damage limitation but in the Lebanon when a bomb is dropped on your head there is not a lot you can do about it. I wonder how many Hezbollah the Israeli's have got so far,

probably not a lot.
Over the centuries it has been unexcusable to persecute the Jews and the things that happened to them was terribly wrong but what happened to them during the 2nd world war did not justify the stealing of the land of the Palestinian people.
But we cannot go back. Each side should accept that they are religious people and act like religious people. Sit down together, call a truce and accept that the Jews should never have been given a land that was not theirs and move on. Accept that the land has to be fairly split in two and these religious people have to live together in peace.
Yes Israel may have more money, more fire power, more political power but the Palestinians have a weapon that the people of Israel just do not have and could one day rise up against them- a massive birth rate. For a religious people that has been so badly treated throughout history the people of Israel have the opportunity to be the authors of something really good-PEACE.
Religious people shouldn't fight each other like this- surely the doctrine of the Jewish people and the Muslim people is to forgive and live in peace?PLEASE.
Mother of Many x
Posted by MOTHER OF MANY at 1:11 pm