BLOWING IN THE WIND 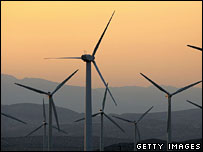 It seems that a survey was carried out on approximately 20,000 people around the world for The BBC World Service and almost everyone felt the same. The survey was on the way energy is being consumed and the long term effects on the environment and peace. Most people were reluctant to have to pay more personal taxes but felt that car manufacturers should pay more and that there should be tax incentives for renewable energy.
'We're worried' seems to be the message from the survey.
With the little money that I have I feel that my hands are tied as to how much I can actually do. I would really like the government to promote solar energy and wind energy by making solar panels and small windmills available to the public at cost price. I have read about projects they have been involved in before but they were very limited and you had to apply, lots of paperwork was involved and only a limited number were available.
For a lot of people money is tight and providing for their family now and in the future can be a hand-to-mouth experience, any money that I have is for Beauty's future so take heed government leaders and help us to protect and preserve this planet before it is too late.
Zidane has said sorry to all the young people and children he let down by his actions and said his actions were due to insults to his mother and sister, it was good that he did not go into detail whilst so many people including youngsters were watching. I am sue that we will eventually find out what was said but I feel that Zidane acted very well.