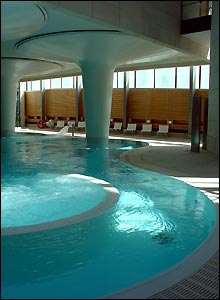 Did you read the one about the spa opening date that came and went and the cost escalated to three times it's original estimate and finally cost £45 million? Well Anastasia it is finally finished and open, at last! Love the Frank Lloyd Wright inspiration. Bath Spa was opened today.

I tried very hard to get onto the computer to day to finish my blog but Fiona and SnoWhite spent the day fighting over who should use it and what for? Well SnoWhite was on youtube constantly and Fiona was on Avatar-I must be getting old as I understand the point of YouTube but not Avatar(definitely an age thing).
I think today deserves a weather report especially for the family on the continent, Fiona says it's cold but I only have to do the smallest thing and I am sweating like a Pig(yes I know Fiona that pigs don't sweat-you have told me many times!). I think that 23 degrees is quite warm but it is significantly cooler at night so even though I sleep on the ground floor and cannot have the window open because of the 'Burglar Boys' night time is a lot better.

raq. What I find funny is the makeup , hair straightners, mobile phone, ipod, stereo and bank card......life has so moved on since I was 17. When I was 17 Abba released their song 'Dancing Queen....Young and sweet only 17', Superman was in the cinema and it was the first time I had tasted a nectarine. I did not have enough money for food let alone surplus to spend on clothes, stereos and makeup, now it is all taken for granted.
No wonder so many people try to go back to basics.
Mother of Many x
Posted by MOTHER OF MANY at 1:03 pm