TOO CLOSE TO HOME 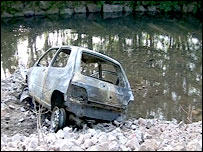 A burnt out car with a body in it was found in the lanes behind where we live(up Newport road from llanrumney and up the lane behind the pub in Old St Mellons then DON'T turn left to Llanedeyrn church but follows those lanes and you come to Began road). I realise that that usually this type of thing is usually people who know each other(I won't say friends!) but it is way too close to home to be nice. I know violence is not the answer but please..... I'm sure who ever was in the car would have have rathered wake up in hospital after a good slapping than dead in a car. But then being a product of a tv age(I know too much for my own good from watching CSI,Without a Trace, Law and Order etc) it could just be something like kids taking drugs, one dies......hide the evidence. Or husband kills wife(why is it always the wife gets killed?) hide the evudence.Kill Jimmy Hoffa, hide the evidence. Naaaa, Jimmy Hoffa is in my dishwasher, that is why my kids won't go in there. Did you ever see the film Backdraft and the hero rescuing a dummy from a dress making factory? It is probably just a dummy in the car(I hope and pray).
When I think of what we have learned from tv I always think back to Beslan. As we watched the horror unfold it became the whole family shouting at the tv screen, from watching tv we seemed to have a basic idea of policy in a siege situation that those at Beslan did not have.
For a start the local police should have secured the perimeter and taken the crowds back away from the situation. The relatives should have been placed in somewhere like a village hall and the guns taken away from the locals. And where the hell was the camera? Even Fireman Sam has his video camera. For that matter where were the fire service and ambulance? Not there until later. Who was in charge? We have always said that with her knowledge of tv Fiona could have done a better job. The news reports said that foriegn special services were to go in and teach a Russian elite squad to deal with similar situations, I know that this is good but teach the locals as well because by the time the elite squad get there the situation, should it happen again could all be over but the funerals.

AND NOW FOR SOMETHING COMPLETELY DIFFERENT... Look Mel I think your cute, always have always will but do you think it was clever to get caught and arrested for drink driving? You want to be taken seriously as a voice on religious truth then don't be such a nit wit. Do not drink and drive, ever, it is not healthy for you or the other poor people you could run over and kill. You want to drink then get a chauffer service, let me see you have enough money get your own chauffer! If you really feel the need to drive under the influence of alcohol(though why anybody would is beyond me) then buy a big piece of land and with no people on it, drive to your hearts content but don't blame any one else when you end up dead.
Just think about what you will do to your poor family who love you. Ooooops now that was a rant!
Posted by MOTHER OF MANY at 7:24 am