VIEWS FROM AN OXYMORON 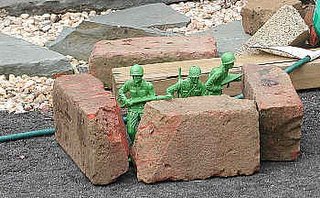 The green army men have arrived in our home and like the OOOD from Doctor Who they live only to serve. Their mission is to protect my window sill from the tribulation that lives outside the window and day after day, hour after hour and minute after minute they are lined up and re-lined up and re-lined up by Beauty to keep us safe whilst she sings OH THE GRAND OLD DUKE OF YORK. Beauty has not yet grasped that my radiator cover only needs protecting from her- and she has tried repeatedly to line the army men up on the radiator cover and succeeded in kicking the fret work panel in, she is my destroying angel.
Considering the anti-war feeling that is in our family it is surprising what a military family we really are. Grandad was in the army (until he allegedly shot himself in the foot in the 2nd world war), my sister was in the army, I was in the air cadets, my brother has been in the army cadets for years and Ariel is in the army cadets and possibly wants to join one of the services and of course Piano man was a trained killer(well bandsman really) in the tank regiment and they have an uncle who was a helicopter pilot. But perhaps it is the families with most connections to the military that really know that fighting is not the best answer( although at times it can seem the only one) as they have the most to lose.
I am against war and fighting but I am not against self-defense.
Is that an oxymoron?
if you are going to have an army to defend yourself then the best army is a professional army not a reluctant one. I read a recent news report which said over a thousand military personnel have gone AWOL since recent hostilities began. Scarey or what!
Remember Toy Story 1 where Andy's mom steps on the soldier in the hall? Well I swear it was an accident! What were they doing hiding under the sofa? I was cleaning this morning and I moved the sofa and there were 5 soldiers hiding(why I don't know) anyway, I didn't see #6 and I am afraid he became unatached from his base. And last night believe it or not Piano man Beauty brought me 2 soldiers who I at first thought were broken but no they were somehow linked and I had to disentangle them. They were in a very compromising position!
I went upstairs this morning to get a strappy t shirt as it was really hot and I was confronted with a mess of nightmarish proportions, remember I don't go upstairs very often as I sleep downstairs with Beauty, I found a huge heap of dirty clothes and towels in Fiona's room and a huge heap of dirty clothes and towels in my bedroom. Remember 'TOWELGATE' where Belle said I couldn't have found 12 dirty bath towels in her room as I didn't own 12 bath towels, well bad news Belle you have lost your crown of the princess with the most dirty towels in your room. I found 13 dirty bath towels and Fiona said they all belonged to Ariel, this is the Fiona who comes out of the bathroom with a towel around her waist, a towel around her top and a towel on her head(all bath towels!) and me with almost shoulder length hair I am able to manage with 1 hand towel.
I am sure however that Ariel will say they were nothing to do with her, it will be a bit like the 'I found it on the stairs' excuse. If one of my girls is found wearing clothes that belong to one of their siblings they will say,'I found it on the stairs' and the answer will always be,' and that makes it ok?' if nothing they are predictable, they would make lousy serial killers as they always stick to the same format.
Remember to pass on the message I gave you to Belle from me Ariel, thanks.
Remember Belle,'We are the world'.
Brilliant news, it seems the baby my niece is expecting is a girl so my girls are busy, busy, busy crocheting and knitting baby girl things and it seems that she wants to call the baby Ruby so that also helps with colour choices as knitting with white and yellow can be a little tedious. I have been knitting a pink with multi coloured flecks blanket for a while now so it is good to know who it will go to. My girls are so excited about the baby, we all think it is wonderful and my sister and her husband and my two nieces must be thrilled.
I watched Big Brother this evening and I am so shocked that people act like that, some of the residents remind me of Imran Khan. Once Imran Khan was asked about something and he lied and it was really silly to lie because there was video evidence of what he was denying, the residents seem to forget that the camera is watching them 24/7. I really like Pete, Glyn, Ashlyne and Richard. I think that whilst Nicky can get on your nerves a bit she is still very silly and very funny. Imogen, Lisa& Mikey make me really angry at times and I don't like feeling like that.
Hwyl
for now
Mother of Many x
Posted by MOTHER OF MANY at 10:50 am