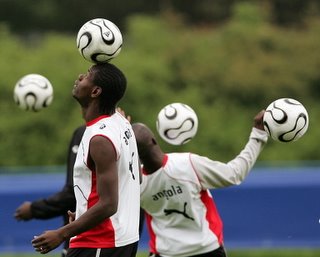 Last night Running man and myself watched the Angola v Portugal football match( let me knit or crochet and I can cope with most tv-unless of course it is a speech by Bush or Blair). At the start of the match there was a round sign/poster of some kind on the middle of the pitch which said something about fighting racism, great I'm all for that. However, a few minutes later the commentator goes into a spiel about the history of the animosity between the countries because of Portugal ruling Angola for so long. A few minutes later the commentator starts shouting about the Angolans beating their lords and masters. Well I was Gobsmacked, I'm sure the commentator wasn't being racist but he just shouldn't have said it. I looked at Running man (who is not usually into noticing deep and meaningful)who doesn't have a racist bone in his body and he looked at me and we were both shocked at what had been said. I felt like shouting at the commentator,' engage brain before speaking'.
Angola lost but I think Portugal were just lucky and should watch their backs.
Funny old weather today, it started off grey then sunny then rainy then sunny again- hey I'm sounding like the weatherman-true brit huh? Talking of neighbours not of the spotless kind, major hoo-haa as I was bringing Beauty home from school. Mother, father, son1 and son3 all involved in the street so I rushed into the house and hid-mother legged it off up the street!!!!!!!!
I don't like confrontation.
Watched Big Love, I will e-mail you.
No real gossip-my compost too wet so it smells( see how interesting my life is)-Ariel went out with her mates-Beauty starting to repeat words as you say them(be careful Sno-White)-I bought lots of wool in different colours to crochet granny squares-after months of waiting council finally sorted out my council tax- oh I love my life.
Beauty foot smelling again-why can't she just memorise phone numbers?
Piano man's cousin stayed over the weekend, she washed her own dishes once and messed in the garden and commented on how clean everywhere was but that was it. Hey woman I need a bit of help here.
Hwyl
Mother Of Many x