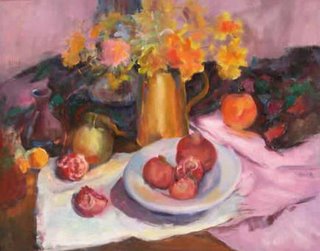 I'M IN LOVE - WITH POMEGRANITES!

They have been out there forever and I have seen them in the fruit aisle wherever I go but I have never bought any. The other day I saw some Pomegranite juice and thought- oh that sounds nice and so I bought some and it was the most beautiful juice. I gave Fiona a drink but she only took the smallest of sips and she said it tasted flat- well duh....it's flat because it's fruit juice.

I LOVES BLINKING, I DO
Today whilst standing in a queue waiting to pay for a t shirt, a little girl in front of me started to blink at me, I blinked back and she started to laugh. She must have been less than 2 but she was well able to converse using just blinks. She was in a double buggy with a baby boy next to her, she introduced me to the boy(who as asleep) and we were blinking away quite happily. The little girl was with an older lady who was totally unaware of the fact that we were communicating. It was the universal language that Paul Coelho talks about in the Alchemist.
It made me think about Beauty and how she is able to communicate with me without words and lives in BeautyWorld, where no one can hurt her and she is innocently happy. I think she is a blessed child who is not able to understand the horrors in the world that surround her.
In the same way that we can only retain a certain amount of memory at one point or our brains would go into meltdown, I think that we HAVE to try not to ponder too much on the awful things going on in the world or we would breakdown. I do as much as I can but I know it is never enough so I have to try and put the full horror to the back of my mi 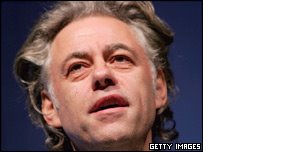 nd.I believe that Beauty will never be truly aware and that makes me happy.
When Bob Geldof brought the issues of Poverty to the fore it wasn't Bob Geldof who I put my trust in but the world leaders who made promises, promises to do things that I can not do.
I do my best and any charity who sends me a request for money in the post gets £5 , not a lot but I don't have a lot. I also put all my change into charity boxes everytime I go shopping. I give old clothes and bric-a-brac to charity shops. I regularly give money to World Vision and I raise money for The Hollies Special School in Cardiff but it will never be enough. World leaders have to do what we little people cannot do, they make the global decisions that are most important. They are the ones who can put an end to wars-if there were no wars there would be no problem feeding the people of the world.
Have you heard the one about the lost handbag? This is a story that I swear on my life was told at a church meeting. On the way back from holiday a couple flew into an airport and the wife put her hanbag on the luggage trolley and left it there. A few miles down the motorway they realised that it had been left behind so they turned around to retrieve it. Racing along the motorway they prayed fervently to their God to let the bag still be there and lo and behold it was. They stated in that church meeting that they believed that God had answered their 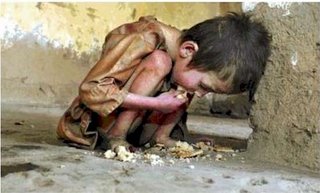 prayers. None of the priesthood in that meeting stood up at anytime and said they were wrong. So it must be mormon church doctrine that a members handbag is worth more than the life of s starving child. I have heard it stated that God cannot intervene to save these children because it would be against Gods laws and these children are suffering because of the sins of mankind. Mankind caused their poverty so it is not for God to intervene. I have also heard it said that it is other people who learn from the suffering of these children. Well I don't want any child to suffer for me, I would rather go to hell than have to 'learn' something from their suffering.
If there is a God and this is his doctrine then God is bad not good.
I don't do anything that I do because I want a reward now or in heaven, I don't believe there is anybody who is truly altuistic, the reason that I do what I do is because I cannot bear the thought of the suffering of other people. I want the awful sense of knowing that people out there are suffering to go away, a feeling that has been with me since primary school when we collected clothes for Biafra(yep, I'm that old). The only way that we can ever feel better is by making world leaders play their part and do the things we can not do, write to the leaders of your country and tell the 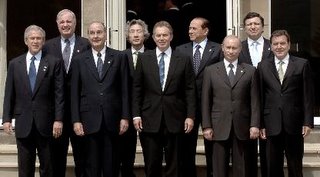 m how you feel. You pay taxes so you are their boss, tell them what you want.......TODAY.

Recognise any of these men?
They were at the G8 last year-tell them what you think needs to be done........before more children starve to death.
Posted by MOTHER OF MANY at 6:51 am