Did you know that Quantum Leap I

s coming back and in production. Brilliant!
Do you know Al from Quantum Leap? Well Dean Stockwell plays Al and his Dad Harry Stockwell played the part of the 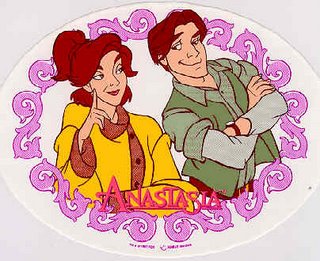 Prince in Snow White. We have more new names for the blog(will it never end I hear you ask), Prince- SnoWhites mate and Dimitri-Anastasia's friend.
And last but by no means least we have Dot, the cutest little bug princess from Bug's Life-a name reserved for the newest addition to the family when my niece has her baby.

Here's Dotty!Is she sweet or what? 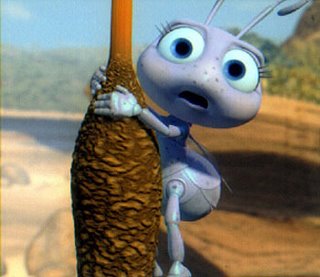 WEIRD DREAM TIME!
You haven't had to endure my weird dreams in a long time so here is the latest caused by lack of rem sleep which in turn is caused by the lack of sleep in an autistic six year old.
Last night I dreamt that I had just come back off holiday from Dubai to find a small white elephant and a large black elephant and 3 rhino's on my balcony and in the living room was a black panther and running around the house was a monkey. I called the police to come and take them away and they cordoned off the road in front of the house which turned out to be the road in front of my mothers house in Rhoose then they anaethetised the rhino who promptly deflated..............oh and it was all the fault of the man next-door!! Where this dream came from I have no idea, I have never been to or thought about going to Dubai, nothing happened in the last few days regarding wild animals but I have thought about my mother but not her house in Rhoose. Dreams are such strange things.
Moral of the story...............don't mess with the rhino!

APOLOGY DUE
Last Christmas I visited my sister Megara and her family and we also visited with her two girls Ashlyn and Edeline. Now Edeline is younger and at Christmas she looked like a skinny teenager but when we last visited in the summer she had grown up and Ashlyn and Edeline looked like twins, beautiful young women. Well I couldn't stop saying how they looked so mature and the same and when we visited last weekend I mentioned how they looked the same and I know Ashlyn was upset and I want to apologise. It is all in the face, yes Edeline may be pregnant but you don't look anything like her like that. Edeline has a bump and you look very slim and I am very sorry. I bet you as well that within two weeks Edeline will be back in skinny jeans whilst I still have my belly and Beauty is six!
Posted by MOTHER OF MANY at 6:05 am