A PAIN IN THE ELBOW!

It's too early, I have a sore throat and it's bl**dy raining! Oh well whinge over and back to being GLAD.Pollyanna would be proud of me.
First major Christmas shopping expedition last night to Matalan and the Range, this year I have decided to make my Christmas baskets individual and with a theme and last night I was able to buy quite a lot. However, I still feel as if I am only in the foothills of Everest as far as my Christmas shopping is concerned.I want the baskets to be individual and show we thought about the person we are giving them to and no there will be no khaki in Ariel's gifts this year, promise!
Anastasia and Dimitri will be here at the weekend and they are so looking forward to visiting my niece Edeline and her baby Dotty(when she shows, get a move on baby!). My girls love the name Dot-Dotty, they think it is so cute and they all want it for their babies(sorry girls!).
Anastasia is looking forward to Sunday lunch with Yorkshire pudding(though Dimitri doesn't like Yorkshire pudding,foolish lad), a Full British Breakfast and shopping in Primark.

Cuisine fit for a king. 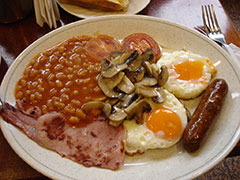 I shall also have to introduce them to 'WHAT' the new shop on Newport Road, like Hypervalue but tons better.
I forgot to tell you Anastasia, you know the house 2 doors down from Pavvas on HollyBush Road that they did a huge amount of work on? Well it's up for sale already. I am surprised as they are a large Asian family and I thought they would be there a while, it didn't strike me as an investment property. The 'study' house on Cyncoed Road seems to be finished and the extension is massive, the extension is as big as Pavvas' house. As well the conversion of the water tower next to the new Synagogue seems to be almost finished and the new sheltered housing on Cyncoed Road is coming along really fast and it looks really well done, it really fits in well though I still haven't forgiven SCOPE for closing the sheltered housing and selling the land.
I know it has been Autumn and you expect to see leaves on the ground but this year there seems to be huge amounts everywhere, I also haven't seen a street cleaner on our estate in a long time and I wonder if Cardiff Council is trying to save money by not sending out the street cleaners. I think that would not be a wise decision, remember the switch off of the lights on the Bay Link Road? Russel Goodway, then head of the council thought that he was saving money by keeping the lights turned off.......until somebody died! I know piles of leaves doesn't sound that bad but think blocked drains and slippy pavements, think of the people who could fall and break bones! How to deal with the problem? Remember I said that Unemployment Benefits should be for a set period only, and should include seasrch for work time and voluntry work? Cleaning leaves sounds good to me.

School leaving age may be raised
England's education secretary is said to be exploring ways to raise the school leaving age to 18.Alan Johnson told political journalists that "staying on" rates must improve.
There's nothing wrong with the idea of making children stay on in some form of education until they are 18 but I have also heard in the media about Alan Johnson not wanting them stuck in dead end jobs but what is a dead end job? Can everyone be a brain surgeon? People need to be made to feel proud of working what ever they do. I have worked as a cleaner, as a carer, as a shop assistant, as a waitress and my view is that all work is important and valid and that is what needs to be promoted. Anyway who does Alan Johnson want to do the 'dead end' jobs? Someone has to do the work.

Can you think of anything more stupid than being incapacitated because of a pain in the elbow?
When I have neck pain that sounds normal, back pain sounds normal but elbow pain that it stops you doing anything sounds stupid. But my elbow is just as bad as my neck was last week and no I'm not just being a wimp, remember 'pain is what the patient says it is'-well it's bl**dy' awful. LIFE SURELY CAN BE A LEMON AT TIMES! THANKYOU MEATLOAF.