IT'S A COLD WORLD 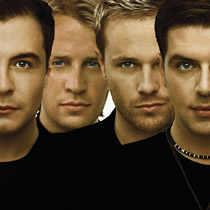 Cold night again, the kitchen is as chilly as Balamory last Christmas, thankfully 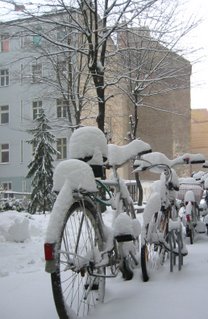 our heating is working whilst in Balamory it was not. I am wearing the thick socks that I bought in Balamory as my toes are so cold.Bright clear sunny day again and the weather forecast says that it is set to warm up a bit, here and in Vienna and Panama city.

As the Queen of weird dreams I have to share these with you. Wednesday night I dreamed that SnoWhite and I were walking down Newport Road near the infirmary and Westlife came out from a concert and Brian McFadden was still with them and he was walking with Kerry.Well Sno White ran up and was all over him like a rash and asking for his autograph and anyone who knows SnoWhite will know that this would never happen so I woke myself up very quickly before the dream became a nightmare. A nightmare which involved a lot of blood and body parts bouncing up the street.
Weird dream number 2-Charlotte Church's mother was running a papershop/gift shop and I went there to get a donation for a school charity raffle. Charlotte was at the back of the shop and we started chatting and we were discussing me going to finish my Masters and doing a PHD but she wanted me to work in her shop for her. We had a lovely conversation, a very nice girl but the only weird thing was she was in full stage make-up whilst we chatted.

Beauty has found a BARNEY DVD , save us. She knows all the words, sung and spoken. Well I suppose it is better than the plastic smiling WIGGLES because they always seem a bit bi-polar to me. 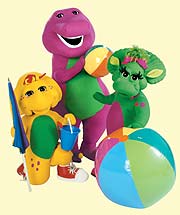 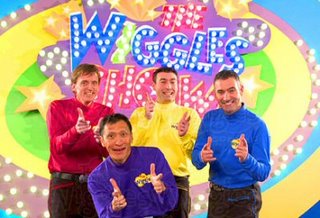 PARANORMAL ORBS
Do I believe in them ? Probably not, I have never had any in any of my photographs until last week and now I have had two. Dust or rain probably. When the lounge picture is larger the orbs on the floor by the chair are a lot clearer. 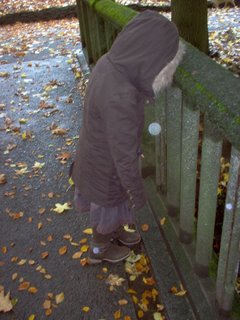 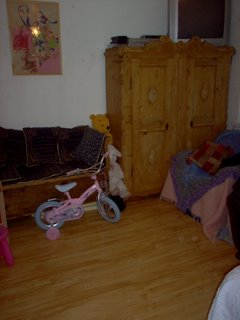 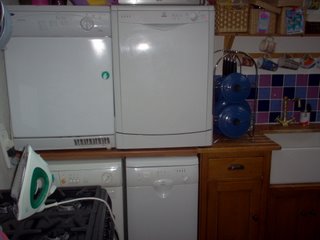 This is the activity corner in my kitchen!
Here lives my washing machine and small dishwasher on the floor and above is the tumble dryer and rhe large dishwasher. When the kitchen was built we realised that with such a large sink unit we could only fit a small dishwasher. But it was just not enough and so I realised that if I could fit the tumble dryer on top then I could fit another LARGE dishwasher on top- and I did! Sooooooooooo.......................I have 2 questions
1: if I have so much space for dishwashing why do all the dirty dishes end up on the draining board(or just anywhere around the house) waiting for me to fill and empty the dishwasher?
2:why can't a certain teenager who wants to join Army Intelligence find any clean glasses? Yesterday morning she said,'MUUUUM, I've searched everywhere and I can't find a clean glass anywhere, where are they'?
UUUUH! try the dishwasher!
Perhaps the same is true for Bin Laden, perhaps he is in such an obvious place that nobody thinks of looking for him there, like his Mum's house! 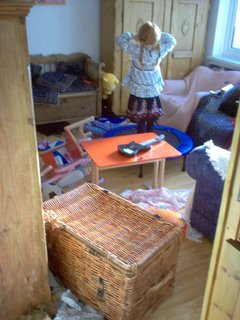 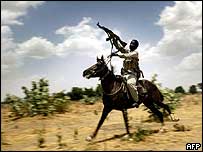 It seems that Darfur Militia are killing again and it is reported that they have killed 62 people in the last week and 27 of those killed were under the age of 12.
When will it be over for these poor people?
Posted by MOTHER OF MANY at 7:31 am