MOVE AND YOU'LL REGRET IT

FOR GOODNESS SAKE WILL YOU JUST STOP IT ! Is the favorite Beauty-ism in school to make the teachers laugh-however soon there will be a new one.
I was playing CBEEBIES on the computer with Beauty, whilst she was eating fromage frais, I turned around for a second and she was covered from head to toe in fromage frais! Whilst trying to clean her up she wouldn't stop wriggling so I said, MOVE AND YOU'LL REGRET IT-and she said REGRET IT. Oh I can see it now, Beauty telling a teacher off by telling them they will regret it if they move! I am so glad that I can control(mostly) swearing in front of Beauty, however SOMETIMES stupid drivers really push me to the limit.
Last night I explained to Beauty that Anastasia and Dimitri were coming to visit her for a few days and I am sorry Anastasia but it was Dimitri's name that she said very clearly, I couldn't convince her to say your name but she was very focused at that time on a bag of chocolate gold coins that she had just found in the fridge. Beauty is like me it seems , not really interested in real gold-that must be why I have huge amounts of silver jewelry(I keep PAST TIMES in business!).
AND to those of you out there who are still asking what to buy me for Christmas, look no further, Fiona just received a Cath Kidston catalogue in the post and anything from there would make my life complete. However, the radio and phone are silly money and anyone who bought those would get a slap! The flowered tins are just fine.
Talking about Christmas presents..............Pianoman is buying this truck for Beauty 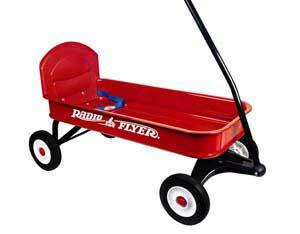 It comes complete with straps!
Is it cute or what?
Perfect for the park.

ts and said he would like a tool box (though I think a foot wide paintbrush would be more useful!).................and last night at ASDA he bought Fiona a chocolate bar!!!!!!!!!!!! I don't think that has happened since Fiona was in primary school. We have pictures of Fiona when she was small dancing around the living room in this house dressed as a fairy, she was so tiny and sweet, it is hard to believe that Fiona was only 5 when we moved to this house, it is also hard to remember when she wasn't 6 foot-she takes after me and I take after my DAD who was a tall guy.
I read about a research project being done in Plymouth and it is meant to show that children get their height from their dads and their weight from their mums, well as far as my girls are concerned that is not true. I get my height and build and head shape from my dad and I have passed on the height to Fiona and the head shape to Ariel. As my brother once said, as far as hats are concerned the label says ONE SIZE FITS ALL apart from his and the same goes for myself and Ariel, we have the large head circumference passed on to us by my dad. And that is one painful thing to give birth to I can promise you, I am so glad that Ariel took approximately 2 hours from start to finish to be born as ay longer would have been too much. And any predisposition to weight in my girls seems to have come through their dad's family, their grandmother on their dad's side has a 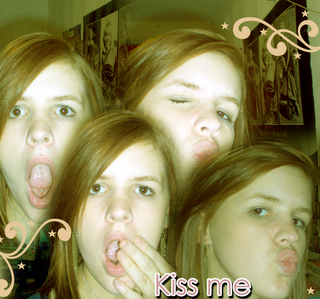 classical British pear shaped figure and I have the figure of a man with no hips and no butt.
Thank you Fiona for another Photoshop creation
Posted by MOTHER OF MANY at 7:40 am