Tighter rules on food ads urged
Teaching, health and consumer groups have written to the government urging it to tighten up the rules on food adverts that target children.they said a revised code for non-broadcast adverts, such as those on the internet, did not go far enough.The National Union of Teachers and the British Heart Foundation are among 10 groups highlighting "inconsistencies" with the rules governing TV adverts.The industry said there was no need for more restrictions like those on TV ads.The new code for non-broadcast adverts, including those appearing on websites, was unveiled this month by the Committee of Advertising Practice (CAP).Its measures - to come into force on 1 July - do not include "rules to restrict the volume or frequency of food advertising to children" and failed to "differentiate between healthy and unhealthy foods", said the 10 groups.

How many children like to go to the supermarket with their parents?
They would rather stay at home....... so the only places they would really see an array of food products is on TV or the computer or in their friends school bags at lunch times.
Food ads need to have tighter rules.
My children may have wanted all these wonderful things in the supermarket when they were growing up but they knew that we could not afford them so they accepted this and didn't ask more than once if they could have something.
Educate the children when they are young is the answer. I KNOW that teachers have a national curriculum but they still need to teach Personal and Social Education and Biology where they can teach about healthy eating, they can teach about healthy eating in Maths and English.
The government should set out regulations whereby only certain products are allowed into schools and make this the same for all schools.
Some times country wide rules are a good idea. After watching Home and Away and Neighbours, my girls have said that they would have loved to have worn summer dresses like the seniors do in these shows if it had been the school rules then everyone would have had to and it would have been OK. Ariel's school made them wear full uniform in the summer, shirt, tie and blazer even in the 5th form during the summer but Belle's school was more sensible and they wore open necked shirts.
I don't think teachers fully realise the power that they have, how many times has your little sweetheart come home and said things like

'Did you know that passive smoking causes cancer?'
'The world is choking on exhaust fumes'

I was taught about the environment in school in the 60's so I am quite happy for my children to be taught now. 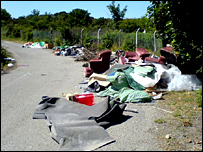 Fly-tipping cost south and west Wales taxpayers almost £2m in the last financial year, it has been revealed.

Almost 40,000 incidents of the crime were reported in the region between April 2005 and 2006 a Countryside Alliance investigation has shown.The worst hit area was Cardiff with 14,125 fly tipping incidents at a cost to taxpayers of £662,108.
A Countryside Alliance spokesman said fly tippers were breaking the law and ruining beauty spots.
Other fly-tipping hotspots in South Wales included Caerphilly where 2356 incidents were reported at a cost of £114,461. Carmarthenshire was also hit hard with 791 reports of dumping at a cost of £128,004.Swansea was second behind Cardiff with 8214 reported incidents of fly-tipping at a cost of £469,483.Countryside Alliance Chief Executive Simon Hart said the illegal dumping of rubbish was a problem across both urban and rural landscapes.
"Many people believe that fly-tipping is something they can get away with and that the victim is faceless - this is nonsense," he said.

I am quite happy for my daughter's school to teach about healthy eating and healthy lifestyle and about protecting the environment. Who wouldn't be?

As you suggest, teaching kids at a young age to be fully socially aware about the environment, health and food issues is essential to achieving a more sustainable human future on this planet. I'm amazed at how unthinking most people are when it comes to the very food they put into their bodies. Very few relationships are that intimate after all! We need to be taking much closer looks at what we eat, how we "process" food and how we affect the food chain that we're supposedly at the top of.