WE ALL LIVE IN A GLOBAL VILLAGE- SO PLAY NICE! 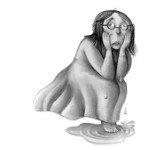 THE RETURN OF MOANING MYRTLE
Yesterday evening Beauty's temperature went up again and she started puking again, she took to her bed and went to sleep again, thankfully I was able to see all the signs and catch any mess in a towel so no more sheets or bedspreads or clothes to wash( I still haven't finished all the washing and drying yet from yesterday). We were wiping her face with a damp cloth and each time we did it she was coming out with a 'woo, woo' noise. 4:30am wake up call-mainly 'waa,waa' Moaning Myrtle noises but apart from that she doesn't seem too bad. It is good having her in her little bed as I can have her right next to my bed. We live in such a global village, Belle phoned from Florida where Beau is working to check on Beauty, Ariel had told her that Beauty was unwell. 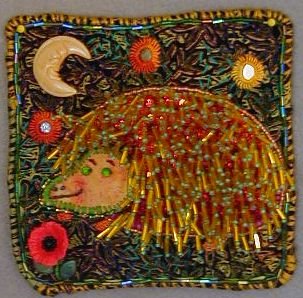 Autumn is definitely upon us as the mornings are now pretty nippy, for the last week it has been quite sunny during the day but it does take a while to warm up. I really would like to live abroad during the winter and live in the UK in the summer. I think it would be nice for Beauty.

THE POPE SITUATION
The Vatican it seems believes that the upset over what the Pope said will blow over very soon...........in their dreams. If the Vatican is under full alert because of possible acts of aggression then they really don't believe that everything will blow over quickly. I don't think this will be over anytime soon as anything to do with religion is so personal to people that things like this are seen as personal insults.The Pope needs for the sake of everybody in the world to say he is sorry for any hurt he caused and to invite Islamic people from around the world to come talk with him and for them all to discuss their differences and put the situation to rest.
Yes I may be an armchair liberal and want world peace but this is getting too personal, I may not be a religious person myself but believe it or not Anastasia, Belle , SnoWhite and Ariel all have boyfriends who are catholic. Catholics do not have blue skin or wear distinctive clothes or wear badges which say, 'I'm a Catholic' which means that we are all at risk whatever the colour of our skin and whatever we wear .
I have just been searching the teachings of Islam on the internet and the way the are instructed to act towards each other is to show respect, love and care the same as in Christianity. Bad things happen all around us everyday and involve all the peoples of the world. Surely the bad things that happen are a lack of control of that dark space in the hearts of all mankind. When people succumb to that dark space they use religion to explain their actions, look at Jim Jones of The Peoples Temple and what happened in Jonestown, David Koresh and Waco and more recently Warren Jeffs. 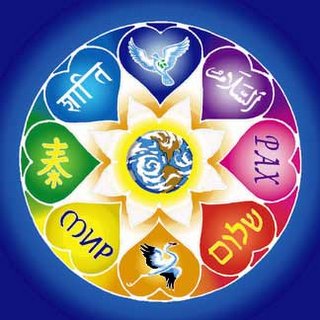 Like I said yesterday, PLAY NICE.
My global village is a very small place and I don't want anyone getting hurt, especially my family and those I love.

2:30pm
SORRY?
So it seems that the Pope is sorry for causing 'offence' BUT he 'hoped that muslims would understand the true sense of his words'. I have read the full speech and it says,' whoever would lead someone to faith needs the ability to speak well and to reason properly, without violence and threats.....to convince a reasonable soul, one does not need a strong arm or weapons of any kind, or any other means of threatening a person with death...'.
ooooooooh! POT, KETTLE, BLACK. I am sure that as Prefect Ratzinger the Pope learned a lot about the history of the church.
I read the speech and there seemed to be no mention of 'violence and threats 'coming from christianity or the Catholic church. The Pope also described the emperor he was quoting as ERUDITE. I understand why the Muslim people are not happy. I see this escalating, they so need to sort this out now.

Amazing recovery with Beauty, lots better. Both Moaning Myrtle and Vomiting Veronica seem to have left us and Beauty has had a few baby cakes and two slices of dry toast. She is stil very weary but definitely in a better mood. I am so pleased. Happily watching CBEEBIES and playing with her toys. She has had a little wander around the house but she is staying mostly in the living room, sat in the chair with her toys.
Posted by MOTHER OF MANY at 5:24 am