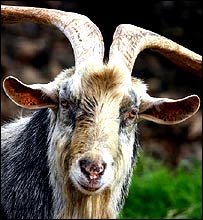 Did you hear the one about the Swiss guy in Canada who said he was speeding because he could and why? Because there were no goats on the roads in the same way as there were at home in Switzerland so he just wanted to see what it was like to drive fast. Well on my short trip to Switzerland I did not see any goats but then my trip was very short but how about you Anastasia and the continental family? I would have thought that here in Wales we had more of a problem with sheep than Switzerland would with goats! It is nice to see that the Swiss are as mad as the rest of us.


Early wake up call with Beauty watching Madagascar, ON REWIND!
There is a bit in the film about a psychotic poodle called Mr Chew, Mr Chew's mission is to EAT one of the penguins from the zoo. Mr Chew is more wild and scary than any of the zoo animals.

For the last week Beauty has played almost constantly with her Army Men, all I can say is that if I step on another one in the dark they have to go. Beauty is constantly drilling them and wherever you look there are rows of them. At the moment the table in her bedroom seems to be the parade ground.
Posted by MOTHER OF MANY at 6:45 am