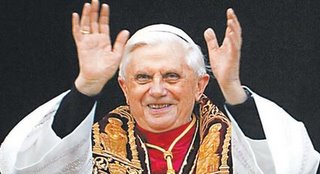 So Pope Benedict XVI gave a speech about the concept of Holy War and in it he quoted a 14 century christian emperor who said, 'Muhammad had brought the world only evil and inhuman things', before I go any further I would like to say that personally I think the contents of that statement is a load of b*ll*cks and don't get me started on the, 'evil and inhuman things' done by other major religions of the world. The question here has to be WHO was talking when this statement was made? Who as in was this a statement by the POPE or was it a statement by Joseph Ratzinger the man. The difference being if the POPE said the whole' evil and inhuman' thing then the POPE lied(as Islam does not seek to bring 'evil and inhuman things') and so the Catholic Church must be a lie as the POPE is meant to make infallible statements- as the POPE. So, by my deduction, the statement must have been made by Joseph Ratzinger the man and not the Pope. Joseph Ratzinger must make an apology and say that these were his own personal opinions and not the opinions of the Pope and the church, he must also admit that within the catholic church terrible things have also been done since the 14 century i.e the Borgia's, The Inquisition and Sexual Abuse Scandals involving Priests and Nuns, BUT these were the products of men not the church(many would say even covering up of sin was the product of men).
Cardinal Ratzinger was Prefect of The Congregation for the Doctrine of Faith which is the historical remnant of the Inquisition, before he was Pope, so he should be fully aware of what the catholic church would authorise a Pope to say and do. I am sure that God, the Church and the Pope would want Joseph Ratinger to apologise in his role as a man and a Pope for the hurt that was caused . He should also use this time to converse and to seek unity and understanding, free from mud-slinging. Much good can be achieved.
My message to Pope Benedict XVI is to use this situation wisely and for good.
And remember, I am not a scholar or academic, I am just a housewife with 6 children and this is how I see the situation. I am sure an academic could debate the subject with me and make everything I say look silly but the things I have said are just my opinions on how people who have a million times more clout than me should get off their butts and start talking.
As Winston churchill said.' to jaw jaw is better than to war war'.

09:19 am
Vomiting Veronica has a friend to stay,Moaning Myrtle.
Poor Beauty. when she isn't sleeping she is vomiting or moaning-with her head under the bed. At the moment she is asleep(in the bed) so I shall have a nap as Beauty was awake a lot during the night.

11:53 am
Wow what a difference a nap makes! Moaning Myrtle seems to have gone home and Beauty is sat on the floor watching CBEEBIES whilst playing with her armies. She is still very quiet but hopefully the departure of Moaning Myrtle means no more tummy or head pains, poor little love. I think a nice warm bath for Beauty this afternoon will make her feel lots better. 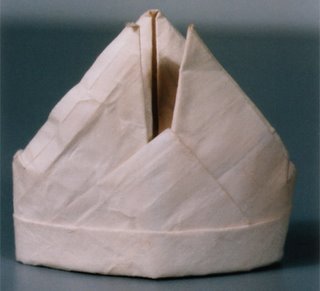 Today is MAKE A HAT DAY-why? I don't know or for those among us who are more religious it is The Feast of Our Lady of Sorrows. She is the Patron saint of Mississippi( as well as other places). 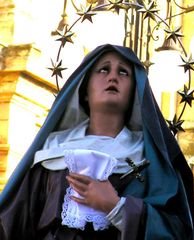 Our Lady of Sorrows
Posted by MOTHER OF MANY at 8:06 am