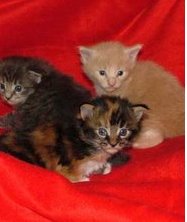 Yesterday was not a good day. New next-door- neighbours went out at about mid-day and it seemed as if the entire population of children from the estate descended on their garden. It seems that they are not keeping the cat and the kittens in the house but in a dog kennel in the garden. I had to go in and retrieve a dead kitten as the children would not leave them alone. One family even complained to the PDSA and they said they would collect them monday. When they returned I explained the advice given by the PDSA about keeping them indoors and keeping them warm and changing them daily . I explained that the kittens were not safe because of the cold , foxes and crows. It seems that this is the third litter for the cat but the cat doesn't seem very capable or defensive. Oh well, we will have to see what monday brings.
Posted by MOTHER OF MANY at 11:02 am