SUMMER IN THE CITY

Yesterday Beauty spent equal time between destroying the lounge, playing the piano, playing in the garden, playing with the bead curtain by the back door, reading the telephone directory, performing acrobatics on the computer chair, watching videos and playing on the computer! We may not have gone far from the house yesterday but we certainly had a busy day.
The parks in Cardiff are a nightmare during the holidays so that is definitely not an activity to embark on lightly, I tend to go in the evenings when the pace is more sedate. Roath park seems to be filled with older people taking their constitutional walks in the morning, hordes of children in the afternoon and a meeting place for Asian families in the evening, the evening is definitely the more pleasant choice for Beauty who is not too keen on lots of noise. The week that we helped SnoWhite to move we passed Victoria Park a lot which was totally overflowing with children playing in the paddling pool and teenage girls trying to get a tan. Way too many people for me let alone Beauty.
Last night I watched the film The Pumpkin Eater, it is a 1964 B&W Brit Flick, I haven't watched an old film for quite a while and I was surprised that I hadn't watched it before, it was a really good film. My parents loved the cinema and films and at home we watched all the films on TV, I especially liked the Hammer Horror films. Anastasia is also a film fan but she is not as keen as I am on certain action films as she has to look away at the violence. SnoWhite also likes films but is not too keen on anything involving spiders and bugs of any kind, she is especially not too keen on The Mummy films due to the bugs running around. She will watch the film however as she loves the prison warden played by Omid Djalli,I agree with SnoWhite that he is one of the funniest men on screen. 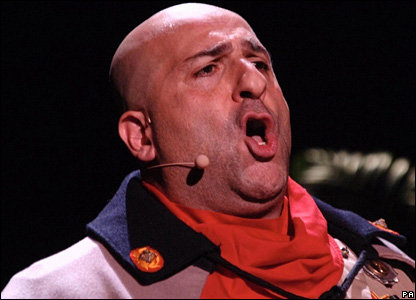 I also think that Oded Fehr who plays Ardeth Bay in The Mummy films is worth watching the films for.

Oded Fehr
Posted by MOTHER OF MANY at 1:55 pm

Hmm. My sister and wife both think that Oded Fehr is prime eye candy. Suits me fine. I get to swoon over Rachel Weisz...!