BACK PACKING IN THE HIMALAYAS

Here we are again, like a pair of computer geeks sat side-by-side at our computers, Beauty and I. After Beauty decided that she was going to be awake until 2am I thought we were both due a lie-in, but not so and it is no fault of Beauty. The persistent phone ringing woke us up and who wanted to talk to us? An automated ring service, somebody trying to sell me something!
They drive me mad but thankfully I have figured out how to deal with the situation...........
I tell them
SHE'S OUT
I LIVE IN A RENTED HOUSE(I DON'T BUT.....) to double glazing sales etc
SHE'S ON HOLIDAY
NO
When we first moved into the house in 96 we were terrorised by a bank who phoned day and night looking for the previous user of our phone number, no matter what I said they wouldn't stop phoning so in the end I said the person was BACK PACKING IN THE HIMALAYAS and wouldn't be back for 6 month(I saw that done on a TV advert) and it worked! They either believed me or thought that I was so insane they never called again.
When we are in DIY stores and IKEA and the double glazing sales staff at the door are so pleased that you speak to them they don't even care when you tell them you live in a rented house, they are just happy you are polite and recognise that they are not invisible(a bit like the Big Issue sales people when you smile and say NO THANK YOU).

What is it with idents ?
Here is an a Weetabix advert from the 90's , in the form of an ident.

They now have NEW weetabix adverts in the form of idents and YES Beauty has noticed them.
She has also noticed the adverts where pieces of watches and clocks are falling from the sky to the Bambi song April Showers and she loves it.

It may be a good advert but the average 6 year old isn't really in the market for a internet mobile phone!

Beauty has started sitting at the computer on her haunches on her chair in the last few weeks. It is as if time has stood still as Belle used to sit the same way on her haunches over 20 years ago and of course with the red hair it is very much like looking at Belle when she was little. Beauty also loves to sing but so far she hasn't shown the same talent as Belle just the same enthusiasm.
Belle used to sing constantly when she was little, she even sang or hummed when she was eating! Please Belle sing a song for us on Youtube, you can set it to private,Beauty would love anything Disney.

Beauty is watching the Disney Channel on the computer and she is watching a Winnie The Pooh video. She is watching Eeyore and he is miserable because it is raining BUT she thinks it is hysterically funny and will not stop giggling, well I personally feel for Eeyore as it is raining here AGAIN. 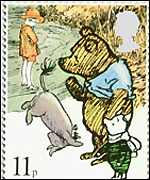 I find the Weetabix advert both annoying and admirable. They've really got the intonation perfect on the voice over!

As with telephone sales people... at first I tried being polite but now I don't bother. I adopt my most off-ish tone, speak over the top of them telling them very clearly I'm not interested and then put the phone down. Very satisfying!

Sometimes with VERY PERSISTENT telephone sales I have visions when I am on the phone with them of putting my hand down the mouthpiece, through the wires and my hand coming through the other end and grabbing their throats and slapping them a few times against the wall and saying DID YOU NOT HEAR? I SAID NO THANK YOU.
I am so glad I am a pacifist!