Now I know where the spiders in my garden hang out!
Today I was putting out the washing in the back garden when I thought OH THE GARDEN COULD DO WITH A TIDY, I estimated it would take 10 minutes but it took over an hour as I decided to empty the planters of old plants and sweep the steps.Behind each planter I found a 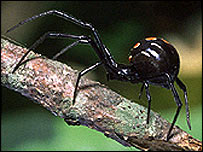 hoard of snails and spiders, the largest spider was about 2 inches across but thankfully that was it's whole size not just the body size.If it was large enough to have a body 2 inches across then Belle in Florida and Anastasia on Rhodes would have been able to have heard my screams without the aid of a phone or Skype.

I am so tired of the way the media is reporting the Madeline McCann story, each time I pass a newspaper stand I have to look awake because I am heartily sick of the lurid headlines of the tabloid papers. I have taken to reading the online version of The Telegraph as it is reporting what is being said and quoting where the source of the information is coming from without making headline claims.

Yesterday I read a comment by Boris Johnston on the Daily Telegraph website which reflected on how the nation has been considering The case of Madeline McCann, he said

We want the story to end, of course. It has been the most wretched event of a wretched summer, and we want it to climax one way or another, even if the denouement exceeds even the ghastliest Channel Five real-life family murder drama.

I do not want the parents of Madeline to have hurt her in any way, whether by accident or on purpose, I like many other people want the sorry saga to be over and Madeline to get the decent burial she deserves if she is found to be dead or brought home if she is alive.
I like everyone else want the truth to come out whatever it may be.
I remember one case of a mother who killed her daughter and her daughter's friend and I watched her crying on TV for her daughter's abductors to bring her back and all the time the bodies were in the attic of her flat. People do do terrible things and they do lie about them afterwards but only the McCanns know what really happened and I think at this point it is important for the police to be allowed to do their job to bring a conclusion to this situation.
Posted by MOTHER OF MANY at 1:36 pm

I think the media circus that has grown up around the Madelaine case has become a monster that's out of control. I can understand the McCanns using the media in the early days to keep everyone focused but the media is not a kind, altruistic animal at heart; it uses anything and everything so sell itself. I feel heart sorry fo the McCanns but can see where Boris is coming from. We all just want it to stop. End the nightmare, end the torture, end this deeply unsavoury circus that has taken over the TV and newspapers.