Did Diana's death change us? 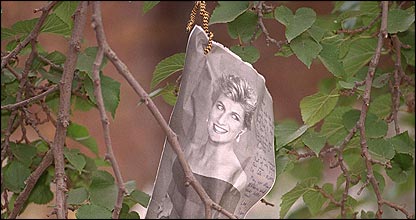 The effect of Diana's death on the British public was as perplexing as it was profound. But was it a blip or did it change Britain for ever?

On the morning Diana, Princess of Wales' death was reported, few could have guessed the extraordinary momentum that the mourning for her would generate. By the time of her funeral it had reached fever pitch with thousands lining the funeral route.

A sea of flowers was laid in front of Kensington Palace, strangers embraced, snaking queues formed in front of condolence books, businesses closed as a mark of respect.

I remember that Sunday morning when Anastasia came upstairs and told me that Diana was dead and being so shocked that I just couldn't believe it. I felt terrible sadness for her boys but the overwhelming feeling was of anger at Charles who had brought years of misery to Diana because he was such wimp. If he had loved Camilla all those years ago then why hadn't he just told his parents that he was going to marry her which he ended up doing anyway instead of skulking around having an affair with Camilla all those years and having Diana involved in his mess.

Before her wedding in 1973 Camilla had been the girlfriend of Prince Charles. However, she was not seen by the Royal Family to be suitable to have the Prince's children, so they were not permitted to marry.

WHAT!
I hope the Royal family have learnt from this situation.
Imagine the response from Prince Harry if he were told that he couldn't marry the person he loved! I am sure he would say that he was marrying for love and he would learn from his own mistakes.

The question was Did Diana's Death Change Us?
The other night I watched the end of a program about Great Britons and the conclusion was that Diana taught us the uncomfortable truth that money and fame and privilege doesn't necessarily bring happiness with it. Her personal joys came from her family and the things she achieved through her work not the fairy tales that we all dream of as children. I think perhaps we all lost some of our innocence and perhaps that isn't always such a bad thing.
Diana's life was a cruel reality eye opener and from watching it unfold we all learned to appreciate the precious things we each had in our lives- loved ones, friends and contentment with personal achievements.
Posted by MOTHER OF MANY at 8:51 am

I'll never forget about hearing of Diana's death either. My oldest was a newborn baby then and I was at that stay at home stage still with him. I was glued to the TV for days watching stories about her death. Her marriage to Charles was a sad situation, especially as it has become known that Diane was aware of his infidelity even before they married.

I must admit I reacted quite cynically to the news of her death - not because I particularly hated Diana or even the Royal Family... I was just sick of the media hijacking her every movement and utterance... and her death actually made them worse. I refused to watch the funeral or to take part in the national mourning. I don't regret that at all. Now I just feel sorry for William and Harry everytime I see them on TV but in an odd way I think they've benefitted from the experience of it all. I can't seem them being manipulated by anyone - not the Royals and not the media. Good for them.