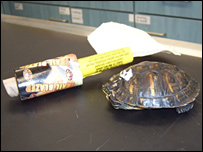 Ad pulled after terrapin attack
Turtle by the firework

An online advert showing a tortoise being shot into space has been pulled after it was linked to an incident when a terrapin was tied to a lit firework.

The creature was found injured by a dog in a garden in Wrexham on Bonfire Night. It had suffered a cracked shell, bumped head and a bleeding mouth.

The RSPCA linked the incident with the Virgin Media broadband advert which uses a cartoon tortoise.

The company apologised for any offence and said the advert had been stopped.

The RSPCA had accused Virgin Media of depicting animal cruelty with its cartoon image of a lit firework being used to fire a tortoise into space, ripping off its shell in the process.

A spokesman for the company said the advert was symbolic of a tortoise who wanted to get faster broadband and it did not condone cruelty to animals.

"We have stopped running our online advert, depicting a tortoise with a rocket, and sincerely apologise to anyone this may have offended," added the spokesman.
Posted by MOTHER OF MANY at 2:07 pm

Good! Glad to hear that Virgin have listened for once. Now if only their call centre bods could do the same whenever I call about the poor service I receive...!

I haven't phoned Virgin in a while but there was a time when I seemed to be phoning all the time and whilst the phone operators were very, very polite( they sounded Indian) I just could not understand approximately 60% of what was being said.AND so they would repeat everything AND apologise for me not being able to understand what was being said. By the end of the conversation I felt awful, I felt that I was embarrassing them because my hearing must be so lousy.AND I so do not have a problem with the being Indian, my biggest problem is my bank who I swear must employ only Glaswegians to answer the phone and with them I understand less than 20% of what is being said.Before I started nurses training I worked for British Gas on the phone and with my bland accent almost every one who phoned would complain about the last operator that they spoke to who had a Welsh accent and they couldn't understand.