THE BOYZ ARE BACK IN TOWN!

HOW DO YOU MAKE SNOWHITE REALLY HAPPY?


All five original members of Boyzone are to begin a UK tour in May, which will be their first in seven years.Ronan Keating, who left the Irish boy band to pursue a solo career, will join the group for the series of concerts."We've been talking about getting back together for some time now. I can't wait to be back on the road and all the guys feel the same." Keating said. The 10-date tour is due to start on 30 May at London's O2 arena, and will end in Glasgow on 23 June.

Boyzone are SnoWhite's first love.
We will never hear the last of it.
Well I suppose it could be worse, she could have been a crack head but instead I have a child obsessed with Irish boy bands.....sounds like a good deal to me!
We have had Take That reform for Anastasia, Boyzone for SnoWhite and now all is left is PJ and Duncan for Belle(believe it or not I have seen PJ and Duncan 3 times in concert!). They were surprisingly very entertaining. 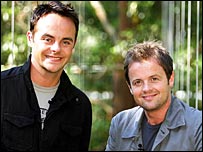 Yesterday I had to buy new keyboards for the computers as both had pretty much died, death by yoghurt-well fromage frais to be exact.Beauty has been known to eat at the computer(well frequently actually) and so no matter how hard we try the keyboards were filthy.I decided to trash the keyboards after sending an email to Belle in which her name was spelled wrong due to sticky keys causing a typo. The keyboards was also stringing all the words as the shift key was the stickiest of all keys. Now we will have perfect emails and no risk of salmonella.

It shows how easily pleased I am.....whilst searching for something else I just discovered how to create a € sign and I was so thrilled. Imagine what I would be like if I discovered time travel or the answer to world peace.

On Tuesday evening I went to Beauty's parent teacher meeting and it was all very positive. The biggest problem with Beauty is her lack of compliance, basically because she doesn't really understand that she needs to do something rather than her being naughty. All her goals I know she has already achieved but it is a matter of her doing them ,on demand, in school. Her speech is coming along so well, apart from the one naughty word that she came out with(which could have just sounded like a naughty word as her speech is still unclear at times) , she is doing brilliantly. Sometimes I have to stop and think about what she means when she says something as one set phrase could mean a few different things in Beauty's head. For instance, when I picked Beauty up from school on Tuesday she said WELL DONE, which roughly seemed to translate at the time as THANK YOU FOR COMING TO GET ME, I WANT TO GO HOME NOW. I think!

I am glad Beauty is doing well in school. That is always a relief to hear. Glad about the boy band stuff too. I don't know much about them but I am sure it is better than crack any day.

Great to hear the parent teacher meeting went well. I think we're going to have the issue with compliance too when our son starts school next year...

Beauty is an exceptionally independent little girl and I think compliance was always going to be an issue BUT we are getting there.
As for the Boyzone thing, they may be reuniting but they have never really gone away.Every time I visit a super market they always play either a Westlife or a Boyzone song, I have never quite been able to escape them.

As for Ant & Dec - I find them the most entertaining thing on "I'm A Celebrity Get Me Outta Here". In fact, given the paucity of true celebs this year they really ought to abridge the title of the show to "Get Me Outta Here..."

Don't you think that Janice Dickinson so looks like Sophie Anderton?Must be the plastic surgery!
I agree, Ant and Dec are the only real celebrities on the show.
And what was Cerys Matthews thinking?
She so did not need to go on that show.