Yesterday was Beauty's first race.
She ran a 2k for Kidney Research around the Cardiff Civic centre and she had an amazing time. 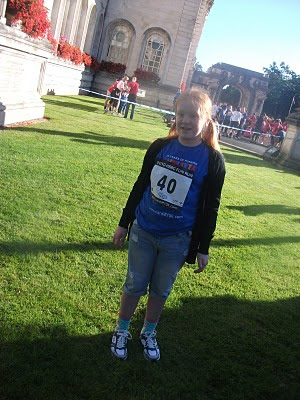 I however was the one who was not so happy.
People just do not seem to understand that it is rude to stare and adults are the worst.
Children are not so bad but even they can be a pain when they follow you just to stare.
The ones who cause me most pain are the ones pushing babies who for all intents and purposes look perfect.I am grateful that their babies are perfect but when they stare too long I just want to stop these people and ask why they are staring.
What a lot of parents of small children do not realise is that YES YOUR CHILD MAY SEEM PERFECT NOW BUT THEY COULD TURN OUT TO BE JUST LIKE MY CHILD!
But I don't and I say to myself MUST TRY HARDER. 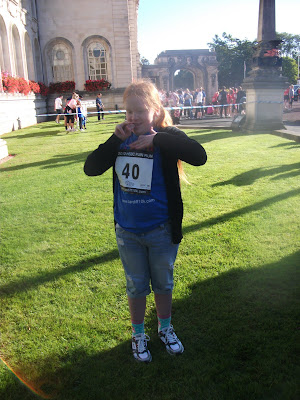 When I read this story in May, I felt shock and anger that this mother got to the stage where she felt there were no other alternatives for her AND HER CHILD!
In one article, I read that she found great difficulty dealing with the way other people stared and the way her son was treated by others when she was out.
And I wanted to say I KNOW EXACTLY HOW YOU FEEL.
But I must clarify here and now that what she did is not anything I could EVER contemplate.
I want more than anything to believe in God but I CANNOT MAKE IT SO and that makes me really sad but what it does mean is that I do not believe in an after life (another thing I would like to be true but can't make myself believe)and so I believe you have just one life that you should enjoy as long and as best you can.

http://www.guardian.co.uk/uk/2010/may/17/murder-of-boy-11-mother-charged
Mother charged with murder of disabled son, 11South Wales police say child may have died 48 hours before body was discovered
(5)Tweet this (5)Vikram Dodd guardian.co.uk, Monday 17 May 2010 20.16 BST Article historyA mother was today charged with the murder of her 11-year-old disabled son who was found dead in a hotel room.

Police say they believe the child may have died up to 48 hours before his body was discovered. It is reported the child had severe autism, and that his mother was found sitting with his body.

South Wales police named the boy as Glen Freaney from the Penarth area in the Vale of Glamorgan.

His mother, Yvonne Freaney, 48, was arrested after her son was found dead at the Sky Plaza hotel near Cardiff airport on Saturday, after friends and relatives raised concerns about the child's safety


I read this story and just wish there had been someone there for her at that last moment when she felt that there was no one else she could turn to.
Posted by MOTHER OF MANY at 6:47 am

That is so sad. And rather a damning testimony to society and its lack of understanding and compassion and respect for other people.

I really don't understand it Steve.
I brought my children up by telling them not to stare at people who were different because it would hurt their feelings and wasn't a nice thing to do.
It seems that a lot of children today are not taught this which is sad for them.