Yesterday it was Beauty who was awake at 3.30am who couldn't sleep and today it is me.

I have a nasty little sucker of a headache and I am afraid it might be of the 'only a good puke will relieve this' kind of headache!

I was meant to got to University with regards to my dissertation yesterday evening but puking over a tutor is NEVER a good idea!

However, what I did manage to do was take Fiona to University and install her in her new halls of residence Tŷ Pont Haearn. 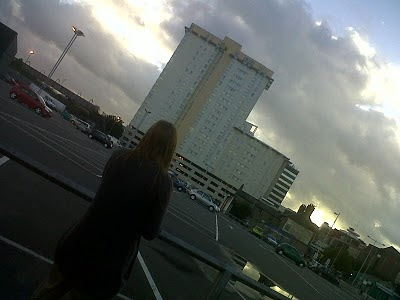 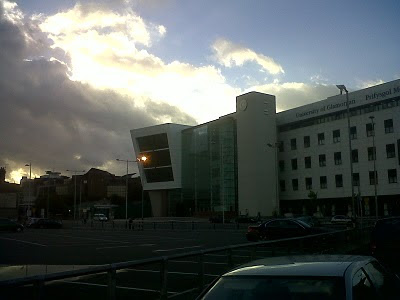 Fiona is about to start a degree in Fashion at The Atrium in Cardiff.

It was oddly moving in a way that it hadn't been with any of her sisters when I took Fiona to University.

When I took Anastasia I was very pregnant with Beauty and that had been quite emotional but in a different way.Anastasia had worked the summer as an au pair in Cornwall and the first empty nesting pains had happened then, so by the time she went to the University of Bath she was really looking forward to it.
Definitely no leaving home for the first time tears!

Belle was confident and bubbly about her going to uni and HEY......it was in Swansea!

Snowhite was and is a Boomerang child and will never be too far from home for too long.As she did a foundation year in Art at UWIC she did not leave home and then in her first year she went into a privately rented house.
Totally different ball game.
And when Snowhite started her second degree!!!!!!!.......well she knew the University of Newport quite well because she had studied in the library whist doing her A levels when I had done my Masters degree.

Ariel, well what can I say?
Ariel had spent lots of time away from home due to school trips, Army Cadet trips and Language School in Geneva one summer and she went into fully-catered Holland Hall at Exeter University so it felt like one more adventure and she was thrilled to be there.

But Fiona, whilst she would not think it was any different , for me it is
Fiona was my baby for 9 years until Beauty was born after I married again.She will always be her Dad's baby of course!!!!
Fiona at 19 seems oddly grown up compared to the other girls I saw moving in and at 19 she is 'oddly' more mature than her sister Ariel!
Ariel admits this herself.

I write snatches of thought, sometimes poetry, all the time, in little notebooks scattered around my life.
I wrote this whilst Fiona was moving her things into her university residence.

My baby leaves home
not for foreign climes
another chapter closes
we have done this five times.

And as for Beauty.... who knows what course her life will take!
Perhaps that is why it feels so different!
Here I am with Beauty who is profoundly autistic and I have no way of knowing what the future will bring for her.
Beauty received a provisional diagnosis at an exceptionally early age,
she was 9 months old and she received a full diagnosis from Professor Fraser when she was approximately 22 months.
And the worst bit for me was the fact that I didn't even notice that she had a problem of any kind.
She was referred to the consultant by a doctor who had noticed problems when she failed her hearing tests a number of times.
My beautiful, lovely girl had problems and I had not noticed a thing.
She was 9 months old and I was a nurse and the mother of 5 normally developing girls and had not noticed a thing.
A few of days ago it all came to a head when I took Beauty to run in the Cardiff 2K.Many people, adults and children were staring at her because she was different and it really upset me.
I wrote this the following day.

Winter came early that year
No autumn winds
Blew the last
Smells of summer
Across lawns dancing
With golden lights on
Gluttering leaves.
And no Indian summer
Sun shone it's last
Rays of sunshine
On little children
Playing in the dried
Grass of the last
Lawn cuts of summer.
But only cold winds blew
And rains fell,
And bleakness
Was all around
And it encompassed me.
AJWH

The last 9 years have been a journey of discovery for me.
A spiritual journey to find my own answers and my own way.
I am a more spiritual person than I was when I joined the church 34 years ago yet I still do not have the answers.
Though I would confess to my life experiences having made me a deeper, more spiritual person(not religious though!!!) .
But hey...who isn't going to become more inwardly reflective when you lose a baby and then you are widowed and lose both your parents within 18 months.
I would love to believe in a God and a next life and being with my family in an eternal heaven but my mind says NO and will just not let me believe it.
So my only other option is to be true to myself and live a life the best I can and hope that if there turns out to be a God then he will be a kind God who will say to me that even though I did not live a life worshipping him,I still lived a good life.
And for that I will be blessed.
In the book The Last Battle by C S Lewis , Lewis writes at the end of the story

'Aslan appears, and as they watch at the stable door, all of the people and animals, including those who had previously died, gather outside the barn and are judged by Aslan. Those who have been loyal to Aslan or the morality upheld by Narnians join Aslan in Aslan's Country.'

And there is a Calormen soldier who is also blessed but he does not understand why Aslan blesses him because as he declares he has worshipped Tash all his days.
However, Aslan explains that whilst he served another , he led a good life and it was as if he served him and so he would be blessed.
So that is my hope,if there is a God then he will be equally as kind.
Posted by MOTHER OF MANY at 3:45 am

I think God, if he's there, is unquantifiably more understanding and compassionate than any human could ever imagine. I hope so anyway.

I dont care whether there is a god or not....but I love what you ve written...you are an amazing person and continue to inspire me ..thank you

Thanks Steve, I hope the same too.

Thanks Mel.
I Can't get over how times has passed so quickly and we are no longer 18 year olds doing nurses training.
I will be 50 next year.
Now that is just wrong!!!!