Yes I am home and very glad to be here.
BUT I know that I shall want to be travelling again very soon(Benidorm(save me)The Canaries,Oberammagau,The Nile),I am always the same.
I once read about Brits who emigrated to Austrailia but after a few years decided they missed the UK too much and then came back here BUT then after a few more years they started to miss Austrailia again and went back to Austrailia and the cycle began all over again!
Hey that is me......I need to travel.
BUT I need to come home too.
I love my home and my own bed.
I have so much news and so much to say that I keep jotting things down in my notebook so I don't forget.
So here I am now.
It is just past 6 am and it is the first day back of school for Beauty of the Autumn term and she is still asleep and will hopefully stay in her bed until at least 7am so I can write this entry and get on with things around the house. I may be writing but whilst I collect my ideas I am also cleaning and tidying and doing the dishes and washing and getting Beauty's uniform ready.
Nothing too exciting or hard really,a little bit of multi-tasking never hurt anyone!
I know it has been said that men cannot multi-task as well as women but then perhaps that is not always such a bad thing.........look at Hitler with his Operation Barbarossa,if he had settled for one attack at a time into Russia during WWII instead of a three pronged attack, then we might be speaking German now. Of course, not that there is any problem with speaking German Dimitri but they were not nice Germans,you have to admit that.
Actually that is very high on my to do list......LEARN GERMAN.
I want to be able to understand my grand-children!!!!!!

First thing on my TO-DO list for today is phone for a Doctors Appointment.
I know it is an FMS thing but my right elbow feels as if it is dropping off with pain and I am unable to sleep it is so bad. As I have said previously,if only elbows could be optional!
It used to be my right hip I would have happily given back but that is no longer constantly painful, only when lying on it.

As you all know and I Beauty spent the summer in the USA and whilst we are thrilled to be home we are missing it very much, our family and friends but believe it or not, as yet we are not missing the weather.You can definitely have too much of a good thing.
But I know come November I will be missing the sun and even Benidorm and the marathon will look appealing.
At the moment though , my neck and back are still recovering from the burning they recieved in Florida.Thankfully the pain has stopped but the itching and flaking drive me crazy(well crazier)at times!

So before I finish as it is getting close to 7am and time for the little darling to wake up for her bath and breakfast, something about my trip to the USA.......what can I say?
The lack of poncy people impressed me most.
A few days ago I took Beauty to Hay on Wye and on the way we stopped at Llanthony Abbey for lunch and whilst we were there another couple were taking their approximately 9 and 11 year old around the Abbey.Well the 2 boys were arrogant,obnoxious,pompous little gits and the parents weren't far behind, they were constantly talking so eveybody could hear and they were showing off.
I am sure there are badly behaved children and adults everywhere but the one thing I noticed about the places that we visited in the US were the lack of poncy, snobby people and I liked that. 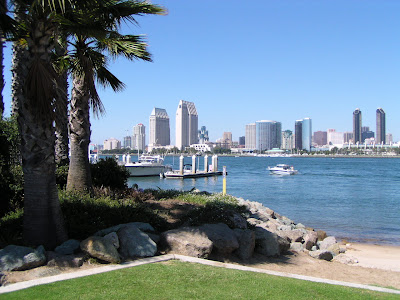 San Diego
Posted by MOTHER OF MANY at 6:05 am

Learning German is a nightmare. I tried doing it at school and failed miserably. So complicated and unwieldy! I can't believe they made operas out of the stuff!

I think you will find he was actually Austrian, and they don't speak real German anyway (according to Anastasia).

I also tried learning German in school and I only seem to have retained the naughty words!

AND ACTUALLY SnoWhite,if you want to be pedantic,I wasn't talking about learning German from Hitler personally......I was thinking more about learning it from his armies who I am sure you will find were German as well as Austrian!
So Blahhhhh!
But I do love you SnoWhite.