I DEFINITELY MUST BE RABBIT! 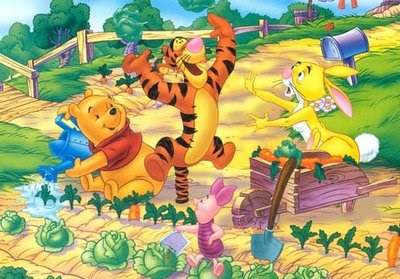 “It's snowing still," said Eeyore gloomily. "So it is." "And freezing." "Is it?" "Yes," said Eeyore. "However," he said, brightening up a little, "we haven't had an earthquake lately.”

“"When you wake up in the morning, Pooh," said Piglet at last, "what's the first thing you say to yourself?"
"What's for breakfast?" said Pooh. "What do you say, Piglet?"
"I say, I wonder what's going to happen exciting today?" said Piglet.
Pooh nodded thoughtfully.
"It's the same thing," he said.”

But then I think again that I surely must be Winnie

and used to believe in forever, but forever is too good to be true.”
And then I think NO I must be Christopher Robin
“If ever there is tomorrow when we're not together.. there is something you must always remember. you are braver than you believe, stronger than you seem, and smarter than you think. but the most important thing is, even if we're apart.. i'll always be with you.”
But in fact I really must be Owl
"The atmospheric conditions have been very unfavourable lately," said Owl.
"The what?"
"It has been raining," explained Owl.
"Yes," said Christopher Robin. "It has."
"The flood-level has reached an unprecedented height."
"The who?"
"There's a lot of water about," explained Owl.
But in the end I know I am most like rabbit.
"Spelling isn't everything.
There are days when spelling Tuesday simply doesn't count."
Posted by MOTHER OF MANY at 5:07 am

The Tao of Pooh - an absolute must read!