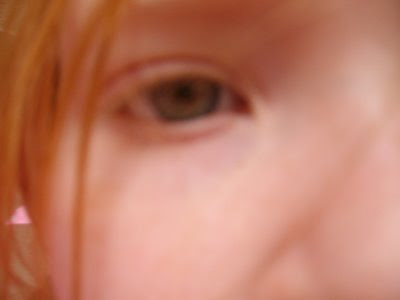 SORRY GIRLS FOR NOT UPDATING REGULARLY.
For the last week and a half I have had a sore throat, sore ears and a b-tch of a headache!
I have had one of those constant thick head aches that doesn't want to shift plus getting on the computer has been almost impossible at times.
And no it isn't the result of alcohol......it would have to be a bloody long hangover as the last alcohol I had and that was merely a sip , was the 31st December1999.
I probably need new glasses.
Beauty appears to be using mine! 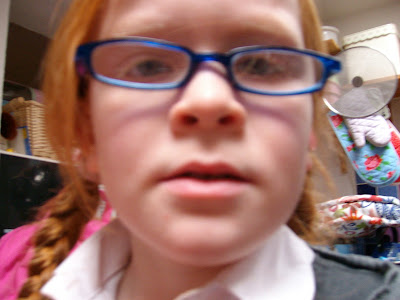 Really good news on the weather front.
The rain seems to have gone and we are having some sun everyday, plus it is a little blowy so the washing is drying well and the pigs and rabbits get to go out in their playpen everyday.

Beauty in her new winter coat. 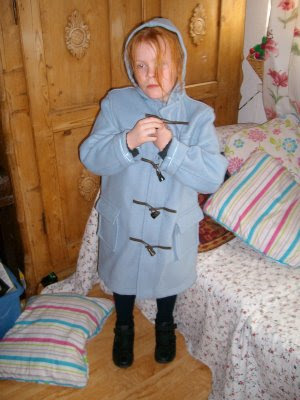 PED EGG
No this is not me promoting the product

I have ALWAYS had dry feet( I know, too much detail) and I seem to have spent my life ( and a fortune on foot products) trying to keep my feet nice. 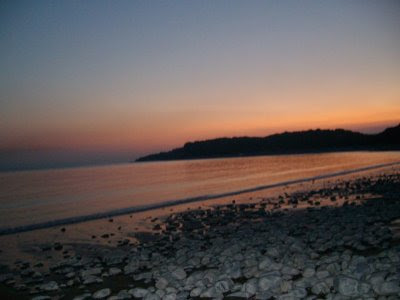 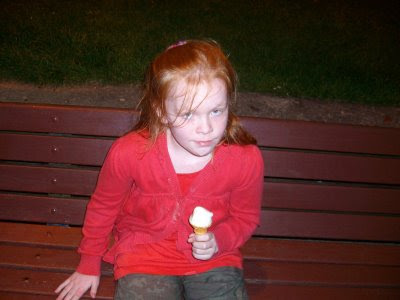 I have been watching re-runs of the COAL HOUSE and I am hooked.
When the program was first shown we were on FREEVIEW and we couldn't get the COAL HOUSE due to poor reception but now we have Virgin TV it is one of my favourite shows.
I was disappointed at the beginning when I started to watch it but that was only to do with my own pre-conceptions of what it was to be about.
My father had been a miner and I thought it would shed some light on what his life had been like growing up but staraight away I could see it was culturallydifferent but even so it was still fascinating.
My father was brought up in Cwm Amman near Aberdare and his mother died when he was very young of TB spine and his aunt lived with him and his father and she took care of the house.My grandfather was a signal man on the railway and worked all the way through the depression and so whilst his work was not brilliantly paid the money was still constant and they had quite a good life.
I remember my father telling us how his aunt would give away the clothes that he had out grown
during the depression years and they must have been doing OK to be able to just give clothes away.
My father went to the Grammar school but decided to go down the pit with his friends and left school early even though his family wanted him to stay at school.When the war broke out he joined the army.
So whilst he was a miner for a short time, his was not the typical mining family.
Being an only child I am sure my father's up-bringing was probably better than the average child.
It was difficult to correlate the hardships of the COAL HOUSE with my father's childhood but even so it was a fascinating show.
Fiona and SnoWhite felt that I would probably enjoy being on the COAL HOUSE program and I think I probably would.
The way they cook on the COAL HOUSE is really not too different to the way I cook and tonight is Corned Beef Hash Pie for the meat eaters of the family.
Due to the number of adverts on TV by different stores about how you can feed a family of 4 for under £5 my girls seem to be especially interested in how much the evening meals cost.
Last night we had a home made pie filled with vegetables and soya mince, potatoes, peas and carrots and Beauty had pasta and sauce and the total came to under £3:50.
Not too bad for these CREDIT CRUNCH times or whatever they are callingit now.

I've only seen the odd ipisode of the Colahouse - enough to know I couldn't have lived like that! Glad to hear you're ok and on the road to recovery.

I feel the same way.
The best thing about shows like Coal Houses is the fact that afterwards you can go back to living your normal life.
Imagine(like Lost in Austen) waking up n a TV show and it being real and not being able to escape.
OH GOD.....imagine waking up in a Big Brother show and having to stay there!
That would be worse than going to the Dentist or even the pain of giving birth!

Just realised a typed Colahouse - that's a different lifestyle entirely where all the kids are hyperactive and the grown-ups have no teeth...!