Our guinea pigs are so entertaining they never cease to make me laugh. Mostly because their behaviour so reflects human behaviour that they make us laugh on a daily basis.


They are especially 'human' in the sense that they never, ever learn from their mistakes!
Everyday is the same routine, I get up and they week and screech constantly until they are fed.

They have a top quality hutch with an upstairs and a downstairs and on the top floor is a separate room with a poopy tray and an area that I use as a feeding area and the stair/run way down to the bottom floor. I feed them in the top area to try and keep downstairs clean but every morning is the same , they are so intent on getting the food first that they grab a portion of the food with their teeth AND run!
BUT one of them always ends up falling down the stairs, like a little fur ball, with their cucumber still in their mouth! Everyday is the same.
Mouth, the ginger pig is so protective of his food that he even sleeps on any uneaten cabbage!
The family joke is that one day the guinea pig hutch is going to completely collapse because even though the little pigs have plenty of food, card and wooden toys to chew on, they have chewed almost every interior ridge of wood off they hutch. They have even chewed the steps off their stairs and it is now just a plank of wood. The family belief is that one day, when the hutch does collapse, they will sit there in the middle of the devastation and have that look on their faces, you know the one children and men get when they are caught and are in trouble and the only way out is by playing dumb(and it always works so it shows how clever children and men really are)!
Then start bitch slapping each other like Tuck and Roll in A Bug's Life

And when the hutch does collapse, the rabbit will have that look on his face which says
NOT A CHANCE, THEY ARE NOT COMING IN WITH ME!

A TIP
When buying a huge IKEA station clock(HUGE!), make sure it is securely attached to the wall. On Tuesday night I was quietly sat at the kitchen table, painting and minding my own business WHEN the kitchen clock fell off the wall and hit me on the head. I have a lump on my head the size of a duck egg. 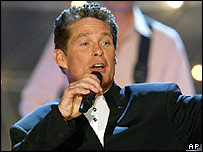 David Hasselhoff
Last night I dreamed that I was at Heathrow Airport to catch a plane to the States and David Hasselhoth was there, he was signing autographs for free but if you wanted your photograph taken with him then you had to pay £30.
I declined his kind offer.

Beauty is progressing daily,her communication skills are coming along in leaps and bounds.
When she is tired and does not want a bedtime story she will communicate this to me by pretending to snore! If that doesn't work and I keep on reading then she resorts to repeatedly saying Shush. She has also been known to kick me off the bed!
Beauty has a favourite bedtime story- the Three Little Pigs. Telling Beauty the Three Little Pigs story is like going to a Robbie Williams concert.You know how Robbie doesn't even have to sing the words to the songs as the audience knows the words so well he just turns the microphone towards the audience and they do the singing.Well I only have to say the first word or two of a sentence and Beauty does all the huffing and puffing and blows the houses down.
I have a question......(well a few actually)
if the Big Bad Wolf WAS NEVER SEEN AGAIN why does he reappear 2 minutes later in Little Red Riding Hood?
What was Goldilocks doing in the woods on her own anyway?
Why didn't the 3 Bears just put milk on their porridge to cool it down?
Why did Daddy Bear and Mummy Bear sleep in separate beds?
I tell you, after the trillionth(if I've told you once I've told you a million times,don't exaggerate!) reading of a fairy story,all you want to do is give Goldilock's mother a good slap for letting her wander and tell baby Bear not to be such a baby!
Posted by MOTHER OF MANY at 6:40 am

Your guinea pigs sound great!
Sorry to hear about your head, i wonder what it was trying to tell you?!

Probably not to trust cowboy builders who created such a rubbish wall that it is crumbling after 4 years!

Perhaps it was something more deep and meaningful like I NEED TO ORGANISE MY TIME BETTER however that'll probably never happen,too much effort.

Any dream involving David Hasselhoff constitutes a nightmare in my book...!

I had a worse dream last night Steve, I spent the entire night dreaming about doing housework.Now that is a nightmare!

Nice to hear that Beauty is progressing in her communication! We have a three bears book from the library right now and it's been a hit with all my kids. I think I've read it a hundred times for my two year old! This version has a rather obnoxious Goldilocks!