'In his Easter Sunday sermon, Cardinal Keith O'Brien will tell worshippers to "wear proudly a symbol of the cross of Christ" each day of their lives.
The leader of the Church in Scotland, he will voice concern at the growing "marginalisation" of religion.
His comments come as a case is going to the European Court of Human Rights to allow employees to wear crosses.In his Easter message, Cardinal O'Brien is expected to refer to remarks made by Pope Benedict XVI in 2010 that Christians "need to be free to act in accordance with their own principles".
Former nurse Shirley Chaplin, from Exeter, and Nadia Eweida, from Twickenham, who worked with British Airways, are taking their call for all employees to be able to wear a cross at work to the European Court of Human Rights.'

If they want to wear crosses to work then fine BUT if you are a nurse then a metal chain around your neck is not safe .

Jesus or the Pope NEVER said the cross has to be a cross around your neck.

What about a patch you can sew on your uniform ?
The Pope wears embroidered crosses so he thinks they are ok . 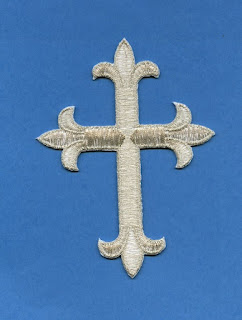