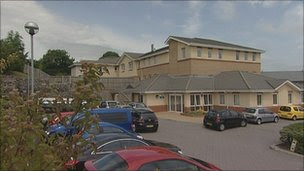 'You pay peanuts, you get monkeys' as the saying goes.
I know people who are working in care homes and the wage is usually basic rate, not enough to feed a family on and because of this the turnover in care staff is high and quality of care cannot be maintained in some care homes.
If the staff were better paid, taught and regulated then perhaps there may be an improvement in the provision of care.
But these are private businesses looking to make a profit so the moment the staff find a better paid job they move on.
I watched the film and from the first few seconds of filming I could pick out those who were not suitable to work in that environment.
So it is not just the carers who should be found guilty of abuse but the people who employed them.
The whole of the Castlebeck company needs to be investigated.

20 June 2011
Winterbourne View Panorama 'abuse' hospital to close
Castlebeck will close Winterbourne View on Friday 24 June Related Stories
Parents 'feel sick' over 'abuse''Abuse'
film nurses are suspended
Care home serious review date set
A residential hospital for vulnerable adults near Bristol where alleged abuse was secretly filmed by the BBC Panorama programme is to close on Friday.
Castlebeck, which runs Winterbourne View, said the hospital would close on 24 June when the last patients would be transferred to alternative services.
Patients at the unit were filmed by an undercover reporter posing as a care worker
The footage showed residents being pinned down, slapped and taunted.
A spokesman for Castlebeck said the company had been working closely with families and carers, the NHS and social services "to ensure patients are safely transferred with minimum disruption to their lives".
After the programme was broadcast Castlebeck apologised and launched an internal investigation.
A number of people have been questioned by police and released on bail following the programme and the government said it would carry out its own review of what happened.
A serious case review into the alleged abuse at the residential hospital has been set for July.
'Future untenable'
Jack Lopresti, the local Conservative MP, said he had met Lee Reed, the chief executive of Castlebeck, earlier in the day.
Mr Lopresti said: "Mr Reed gave me his assurances that the closure of the hospital will be conducted in as sensitive a way as possible.
"I stand by my call for the hospital's closure and I am pleased that Castlebeck have come to the same conclusion.
"Given the horrific events which have taken place at Winterbourne View I believe its future running is untenable."
Posted by MOTHER OF MANY at 7:25 pm

Didn't see the programme but caught enough of the trailers to get the gist. I still find it hard to fathom that in this nanny state of crb checks, etc, abusive people still slip throught the net and are able to have such intimate contact with vulnerable people.

Sadly, all a CRB check does is say that a person has so far not been caught doing anything wrong.