DO NOT JUDGE A BOOK BY ITS COVER .

Tonight Beauty and I baked.
We made these beautiful cupcakes and almost all of the mixing was done by Beauty.
And even if I say so myself, I think they look fantastic :)
But ........when you eat one you will find that not everything is as it seems . 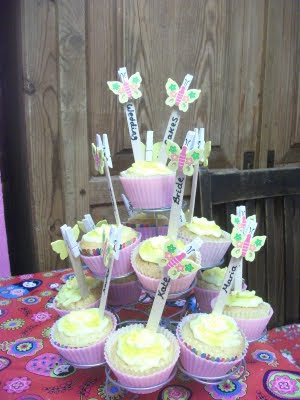 When making them I used very low fat margarine and ordinary sugar.
I used these because that was all we had in the house and I didn't want to go out as my back was hurting and I thought,'what the heck, they should be ok'.
And when you eat them they taste delicious but because of the margarine being so low fat and the ordinary sugar not being as fine as caster sugar, it tastes crunchy and chewy.
Under ordinary circumstances I would have just kept them and eaten them but these were cakes that Beauty made and she knew that we were taking them to school and BEAUTY had made them.
She had made them knowing that they were for a Social Studies Project about weddings and she made them especially for her teachers and friends.
So as well as Beauty, the cupcakes will also be going to school tomorrow :)


Whilst whisking the cakes, Beauty insisted on covering her ears because she doesn't like the whisking noise.
She also doesn't like the noise of the assembly in school in the mornings as the loud noise upsets her.
She also dislikes the sound of hand dryers in toilets because the noise scares her and when she hears a baby cry she thinks a baby needs its nappy changed and she wants me to do it.
This kind of behaviour makes it very obvious that Beauty is different and has some kind of problem.
But being different doesn't mean she doesn't have the right to be who she is and accepted for that. 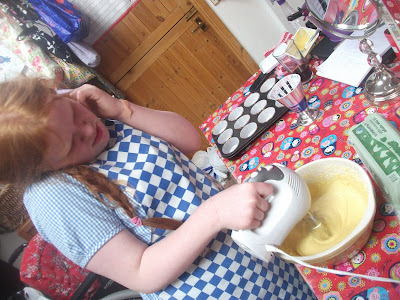 On many, many occasions I have been out with Beauty and I cannot get over the amount of people who just stand and stare at Beauty as if she is a freak.
All age groups.
When I find adults doing it I will stop and stare at the adult and wait for them to realise that I am looking at them and they become embarrassed an turn away.
But some do not and my next action is to ask them,' Can I help you, is something wrong'.
as of yet I have not had one person reply to my question, they almost always walk away embarrassed.
I am easier on children,when they are staring I usually say ,' Hello, how are you ?' and they also will almost always walk away without saying anything. 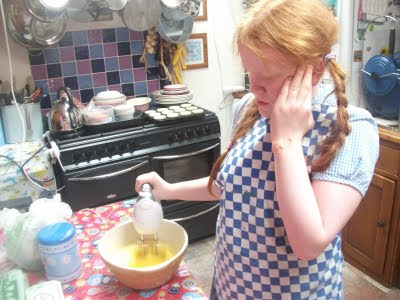 However, what I have noticed is that the staring is done by more people who appear to be of a lower social class. People I would believe to be of a higher social class, adults and children have not stared at Beauty in this kind of way or not that I have noticed.
But there is also the question, is it class that defines the behaviour or their intelligence.
I am sure that there are many working class people who would never stare and would never dream of doing something so bad mannered.
And there are probably people in higher social classes who have very bad manners and would also stare, it is just I have not come across them yet.
I was brought up in a council house which means I was brought up in a lower social class home but I taught my children not to stare as it would be hurtful to the person they were staring at.
That brings up another question.....Is the bad behaviour learned ?
In many cases I think it is.
Before Beauty went to school I was asked to look at main stream schools which I did.
One nursery teacher in charge of a nursery unit ( a qualified teacher) said that she did not think it was a good idea for Beauty to go to her nursery unit as she thought Beauty would upset the children and the children would not understand. She also said the parents also might not be happy having Beauty there.
Well what can you say to that kind of prejudice ?
How will children ever learn to accept people who are different and learn to live with them and accept them if ignorant adults are not a good example ?
Beauty is a lovely young girl, on the inside and outside.
Just because Beauty stims a lot, because she is so happy she laughs and chats to herself a lot,just because she is behaves differently to other people doesn't give others the right to judge her.
I have been reading a blog recently where a father who has 3 children who are autistic writes about his and their lives. He was told by one reader that his children did not have the right to live and he should not have had more children when he found out the first was autistic but at least when they found out the second was also autistic they should have stopped having children. This person felt very strongly about the situation and saw the children as being a drain on society. Whilst others were not as forceful in their beliefs, they did make it known without being as aggressive that they had similar feelings.
I was personally shocked that people should feel the need to say things like this.

I have a question.
People look at Beauty and see her as disabled.
As not normal.
As different.
As quoted in the case above, people with disabilities should not exist.
But who is to say she is different?
Who is to say she is not normal?
I read the book The Chrysalids by John Wyndham when I was about 10 and have never forgotten it

'The Chrysalids is set in the future - many years after a nuclear war has devastated much of the world. Waknuk, in Labrador, has survived, but it has been reduced to a primitive agricultural society struggling to return to the level of civilization that the “Old People” had enjoyed. Radiation from the war has left much of the land useless and is still causing mutations in plants, animals, and humans. The people in Waknuk, however, are unaware of the true cause of the deviations. Instead, they believe these deviations are a punishment sent from God. As a result, they follow a strict religious code that demands that a plant or animal born with any type of imperfection be destroyed. Human deviations are exiled to the Fringes, a lawless region to the south of Waknuk. Beyond the Fringes lie the Badlands (where all of nature is distorted) and then the Blacklands where nothing grows at all. '


In our society, although no one will admit it, most of us discriminate against people who are different to us. In the science fiction novel The Chrysalidsby John Wyndham, people who are do not match the leaders’ idea of the ‘true image’ of god are either killed or banished to the Fringes. The novel follows David Strorm, a member of a group of people with hidden telepathic powers, as he realizes he is different and is eventually found out and chased out of their town. Through Wyndham’s use of narrative techniques the reader has been positioned to see him saying that our society is not too dissimilar to that of David’s. As a society we treat people that are different, either physically or mentally, differently to how we treat people we call ‘normal’.
Read more: http://bookstove.com/book-talk/the-chrysalids-essay/#ixzz1MqEqpZqy

In the book, one of the characters asks how we know what is the norm.
How did the person who wrote the book saying what was normal know what was normal.
Everybody is different.
I honestly believe there is a spectrum for all things and people should not be judged for where they come on that spectrum.
I believe we just are.
And we should all be respected for being who we are.
Posted by MOTHER OF MANY at 10:13 pm

Social graces are, alas, not learnt at school but at home... and some parents just do not bother teaching any. They really are to be pitied ultimately.