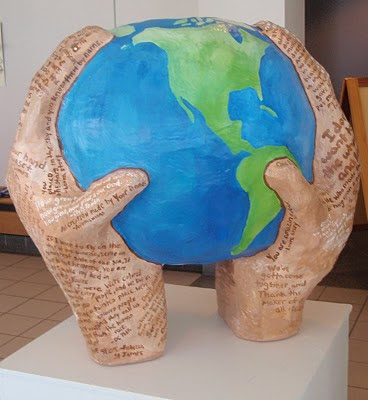 As far as recycling goes I feel it is really starting to irritate me and after a lifetime of always making an effort I have had enough. WHY ? I think it is mostly to do with the attitude of Cardiff City Council. As I have mentioned before, even though I went to a state primary school, I feel that it had quite progressive ideas even though it was the 1960s. Yes girls, that was when life was still in black and white :) I had a subject called Environmental Studies where we learned about the world and how we were destroying the world and what we had to do to save it . 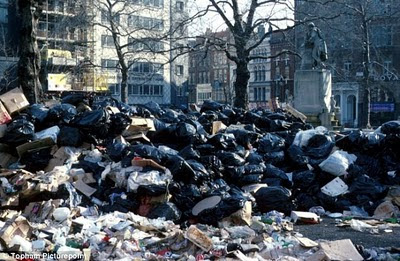 The first real example I have in my own life of feeling we were destroying the world was 1979 - The Winter of Discontent. I remember being shocked at the build up of rubbish in Claude Road and thinking that even when itwas all moved and back to normal, we would still be producing that amount of rubbish . And here we are in 2011 and SnoWhite lives on that road and because most of the houses have been converted to flats and bedsits the rubbish fills the front gardens constantly. Then when I had children.......reduce, reuse , recycle became a normal way of life . And then in the middle 80s recycling household rubbish began. And I have tried to recycle everything . But now I feel at times WHY DO I BOTHER! This week all the residents where I live received a letter telling us that because we hadn't been recycling correctly our collections were to be monitored for a month to check that we were putting the right things in the right bins on the right days. Were also told how much we would be fined if we didn't do these things properly. And the best bit......they got the collection date wrong on the letters they had sent out so they had to post it again with the correct date! Billiant ! So we as residents are told off for not recycling properly but who gets to tell the council off for c*cking up their letter and having to do it twice.Doubling the cost and doubling the amount that needs to be recycled. BUTit seems that buy checking our bins it means that they will literally be going through them to check that we have put the right things in the right bags. Well my thought on that are BE MY GUEST. If they want to go through the nappies and piggie poo and rabbit poo then they can knock themselves out. The smell surely will! Even though the councils rubbish collection department has peed me off I think I more to blame for my feelings than the council. My last years New Years Resolution was not to weight myself in 2010 because I was getting obssessed with weighing myself. So I didn't apart from when I was weighed for my MRI. My resolution this year was not to buy any new clothes because I felt I had way too many. My attempt at reducing and it has been so difficult. I have seen a number of dresses I REALLY love but I cannot buy them AND THAT IS DEPRESSING ME. There are dresses in Tesco,Asda,Laura Ashley and M&S that I would really love to have but I can't buy them because I am REDUCING : ( 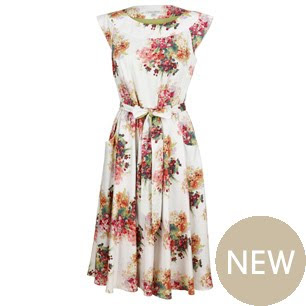 April 2011 Shopping 'may improve health' By Helen Briggs Health reporter, BBC News Shopping prolongs life, at least for the over 65s in Taiwan, according to research. Even after adjusting for factors like physical and mental infirmity, men and women who shopped daily lived longer than those who shunned retail therapy, say scientists. Shopping may provide companionship, exercise and an opportunity to maintain a healthy diet, they report in the Journal of Epidemiology & Community Health. A leading UK expert said the findings "made sense" since shopping involves physical activity, social interaction and keeping mentally active. In the study, published online in the academic journal, researchers led by Dr Yu-Hung Chang of the Institute of Population Health Sciences, Taiwan, studied nearly 2,000 men and women aged 65 and over who lived in their own homes. They found those who shopped regularly lived longer than those who shopped just once a week or less, even after adjusting for factors such as physical limitations and cognitive decline. The data Taiwanese researchers studied 1,850 people aged 65 plus All were living independently at home During a survey in 1999-2000 they were asked how often they went shopping The team tracked how long they lived by linking individuals to national death registries between 1999 and 2008 Those who shopped daily were 27% less likely to die than those who shopped infrequently, with the biggest effect seen in men They acknowledge that shopping could be a marker for those in good health to begin with, but suggest shopping itself may improve health. "Shopping is often for pleasure with the potential to increase psychological wellbeing," they conclude. "Compared to other types of leisure-time physical activity, like formal exercise, which usually requires motivation and sometimes professional instruction, shopping activity is easier to undertake and maintain." David Oliver, visiting professor of medicine for older people at City University, London, said the findings "made sense" He told the BBC: "What the Taiwanese researchers have shown is that continuing to shop is independently predictive of better well-being and longer life. "Shopping is going to involve physical activity, social interaction with other shoppers and because it's quite a complex task it's going to keep you mentally active. "It makes sense that it would be a predictor of better physical and psychological well-being."

Mmmmmm......perhaps I did make a mistake on the NO NEW CLOTHES RESOLUTION :)
Posted by MOTHER OF MANY at 9:27 am

Congratulations. I rarely buy clothes too. It was a conscious choice a few years ago when I was living overseas and I didn't want to have to get rid of stuff when I went home. Then I realised how few clothes, shoes etc I really need. (Kids are different because they are constantly growing). I work from home, so I rarely need work clothes, and every now and then I'll buy something if it's for a special event. And often that will be from a second hand store, or I'll swap with a friend.